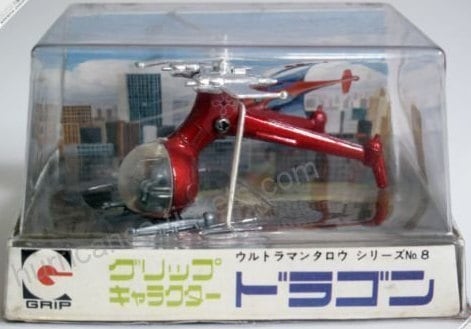 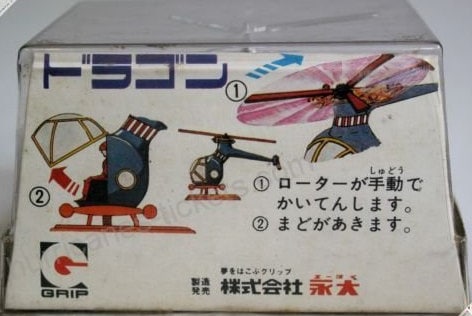 Eidai Grip Bullmark Popy Ultraman Taro Dragon Chogokin Tokusatsu Vintage Japanese Toy NIB, one of several Anime/Manga toys we'll be listing. This is from the early 70s and is new in box, never been removed. It's about the size of a Matchbox, so about 1:64 scale. I wish they made such cool looking helos in real life!

This is from the Ultraman Taro show. Ultraman Taro (ウルトラマンT(タロウ) Urutoraman Tarō) is the 6th show in the Ultra Series. Produced by Tsuburaya Productions, this series aired on Tokyo Broadcasting System from April 7, 1973 to April 6, 1974, with a total of 53 episodes.

The backstory is as follows: Kotaro Higashi wanted to be a championship boxer. However, fate had other plans as he fell thousands of feet from the Earth while chasing after Astromons, a new creature in the third age of monsters. The Five Ultra Brothers brought Kotaro's body to their home world of Nebula M-78 many years into the past. It was there that Mother of Ultra merged Kotaro with Ultraman Taro, who would now form the Six Ultra Brothers. Before merging with Kotaro, Taro spent many years to hone his skills similar to the original five Ultra Brothers by mimicking their attacks through battles from both the past and future. After the merge was complete, Kotaro was taken back to present day Earth being the human host of Taro and as Astromons was ravaging a city Kotaro turned into Taro. Not long after Astromons's defeat Kotaro joined ZAT and fought in a new era of kaiju. Many foes were found that would threaten the Earth, but Taro and ZAT defeated them time and again with occasional help from the other five Ultra Brothers from the weaklings to monsters only Taro could defeat. During Taro's era, Birdon killed him and Zoffy but Taro was revived and killed the bird kaiju. After Samekujira attacked and Valkie fled Kotaro wanted to show Taro and the other Ultras he wanted to keep his humanity by the time has come. Thus, he is one of the few Ultra human hosts to cut his ties with an Ultra Warrior. His current location is unknown.