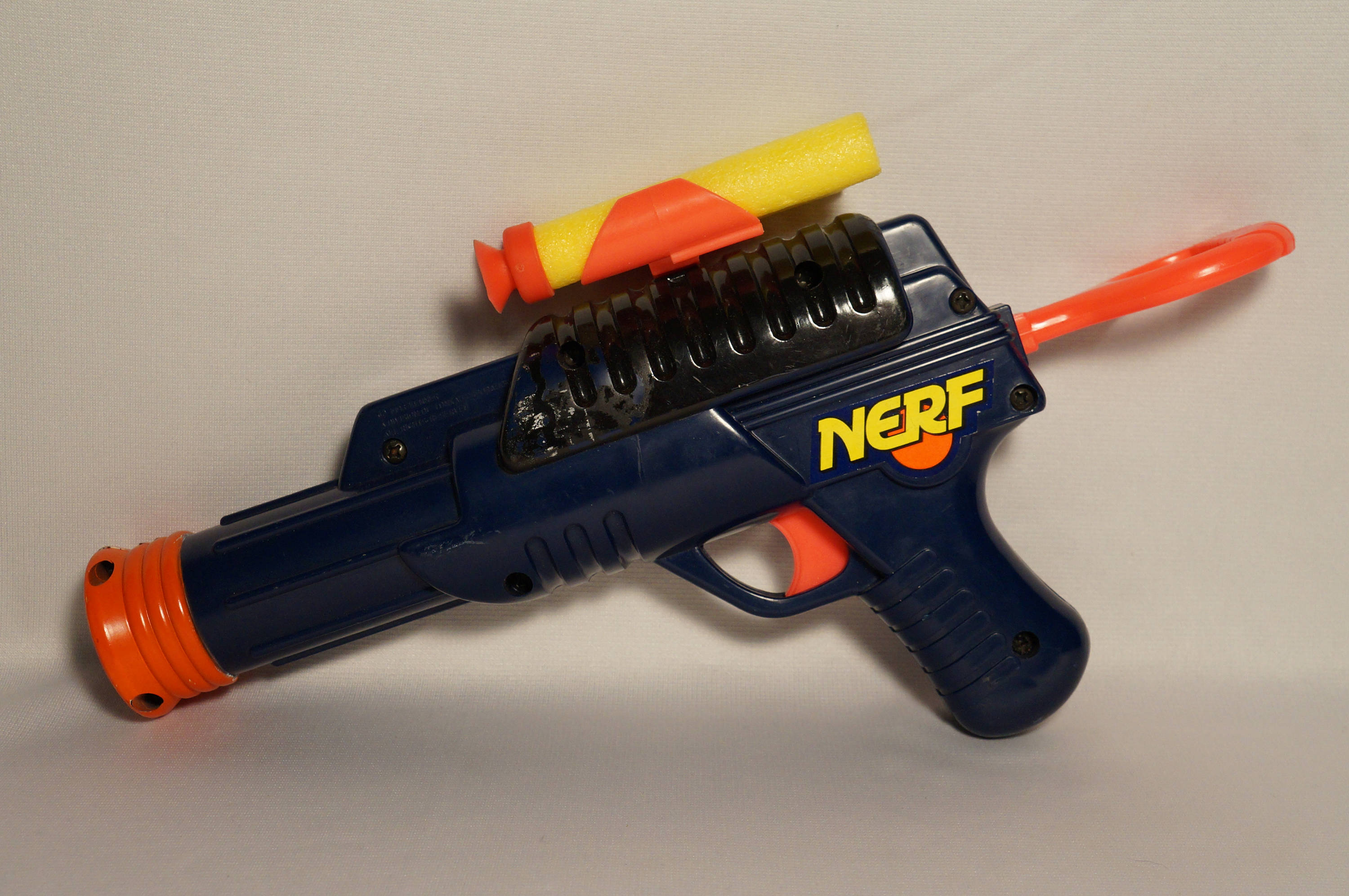 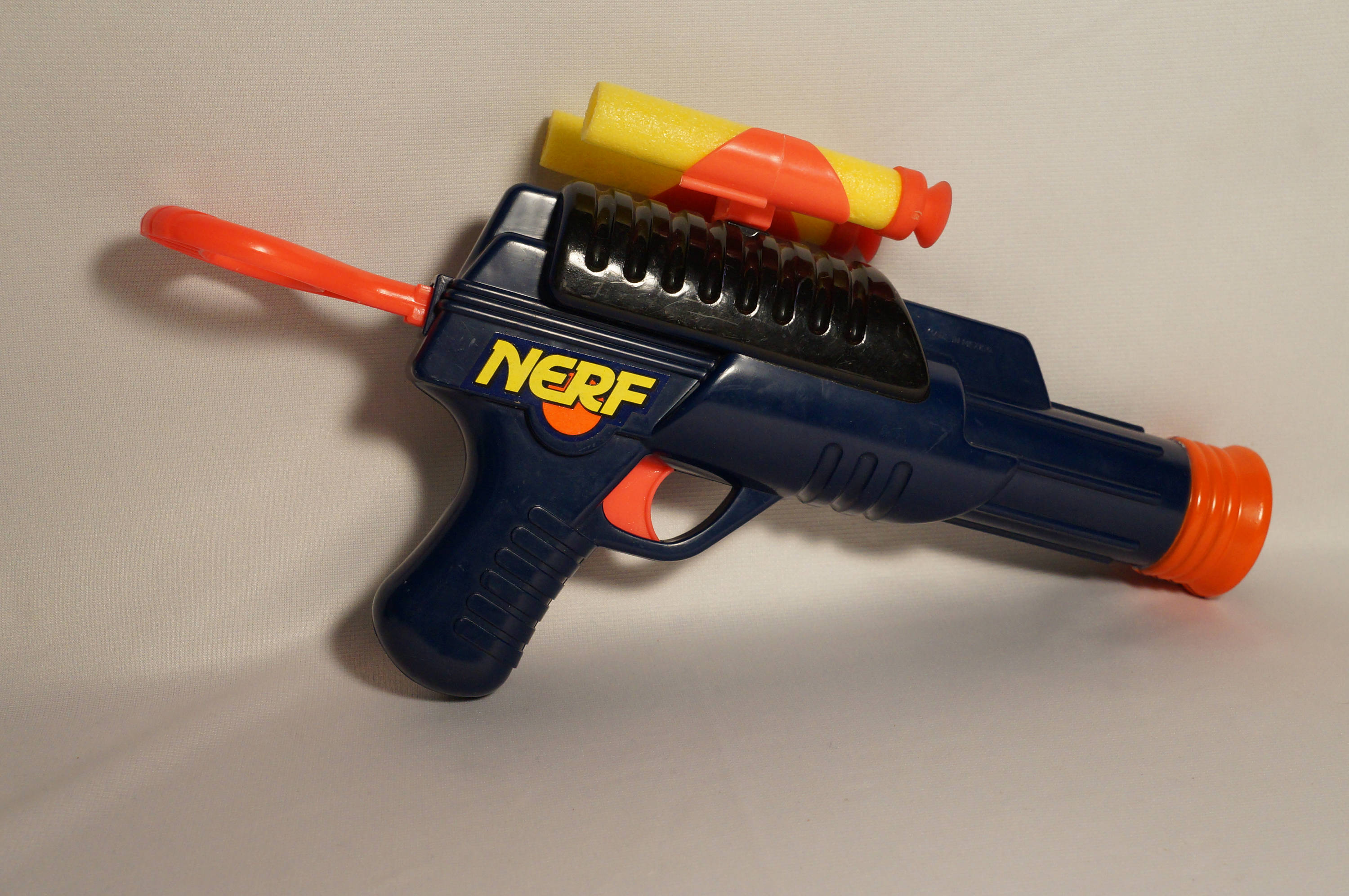 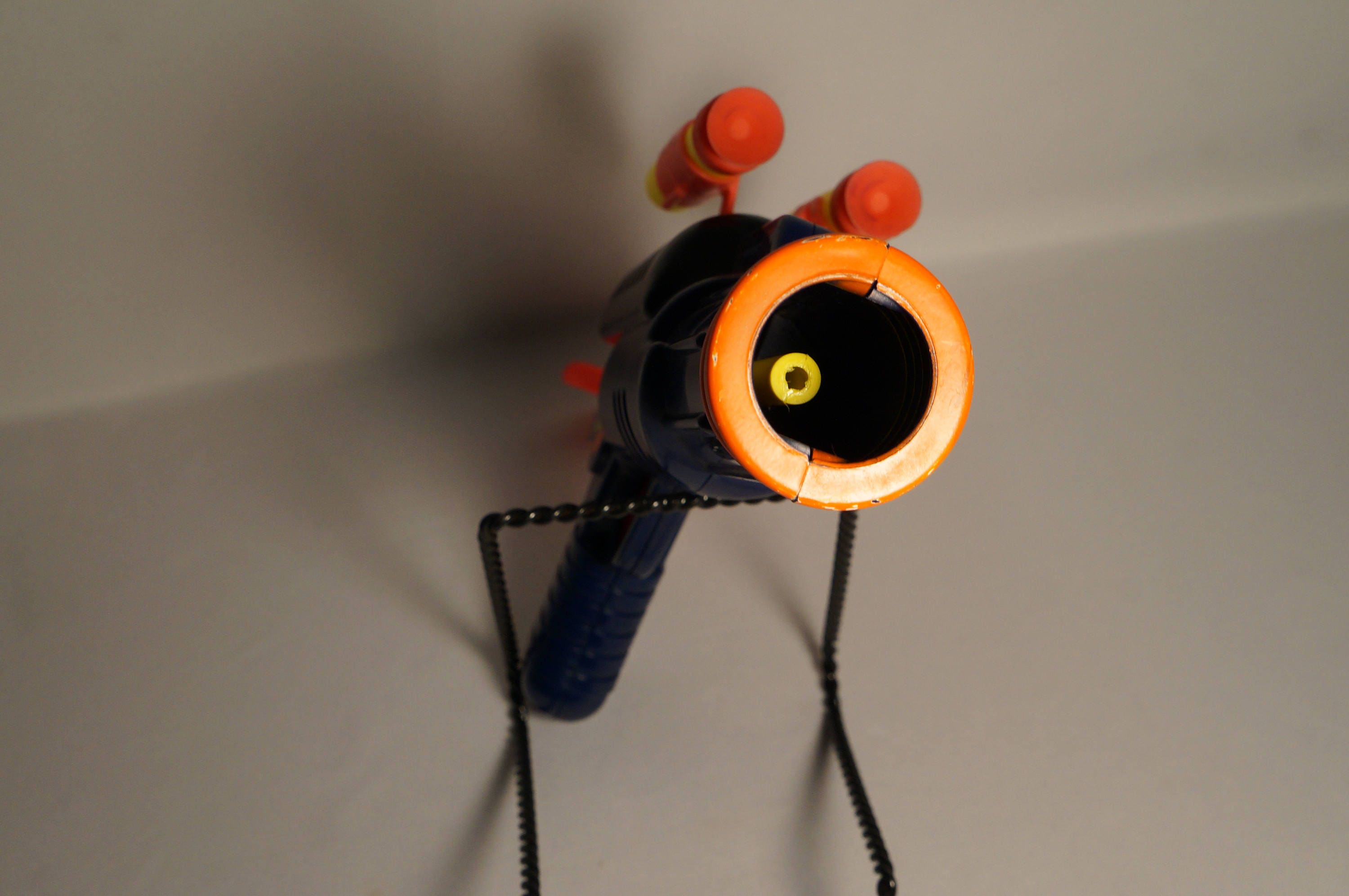 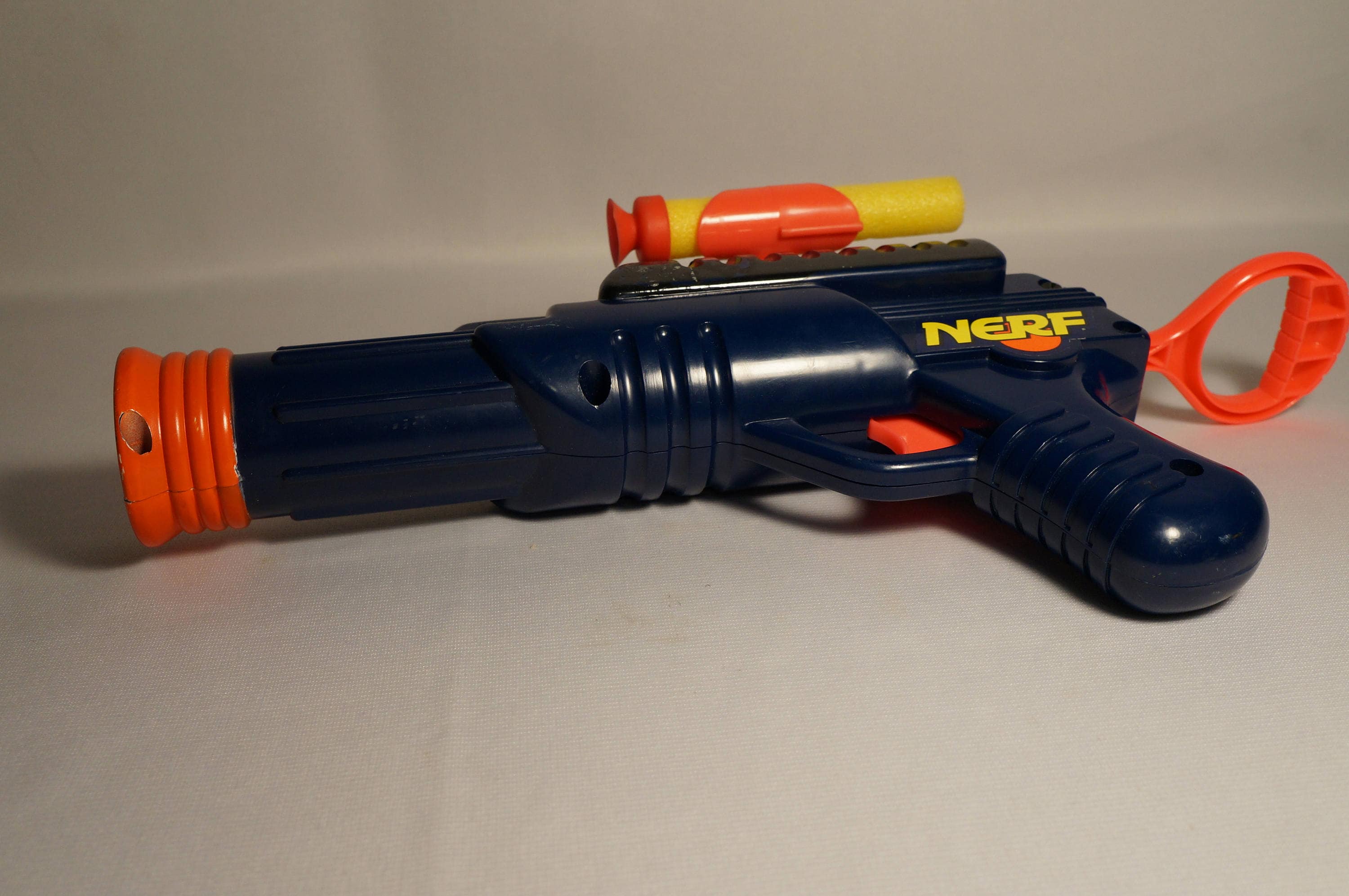 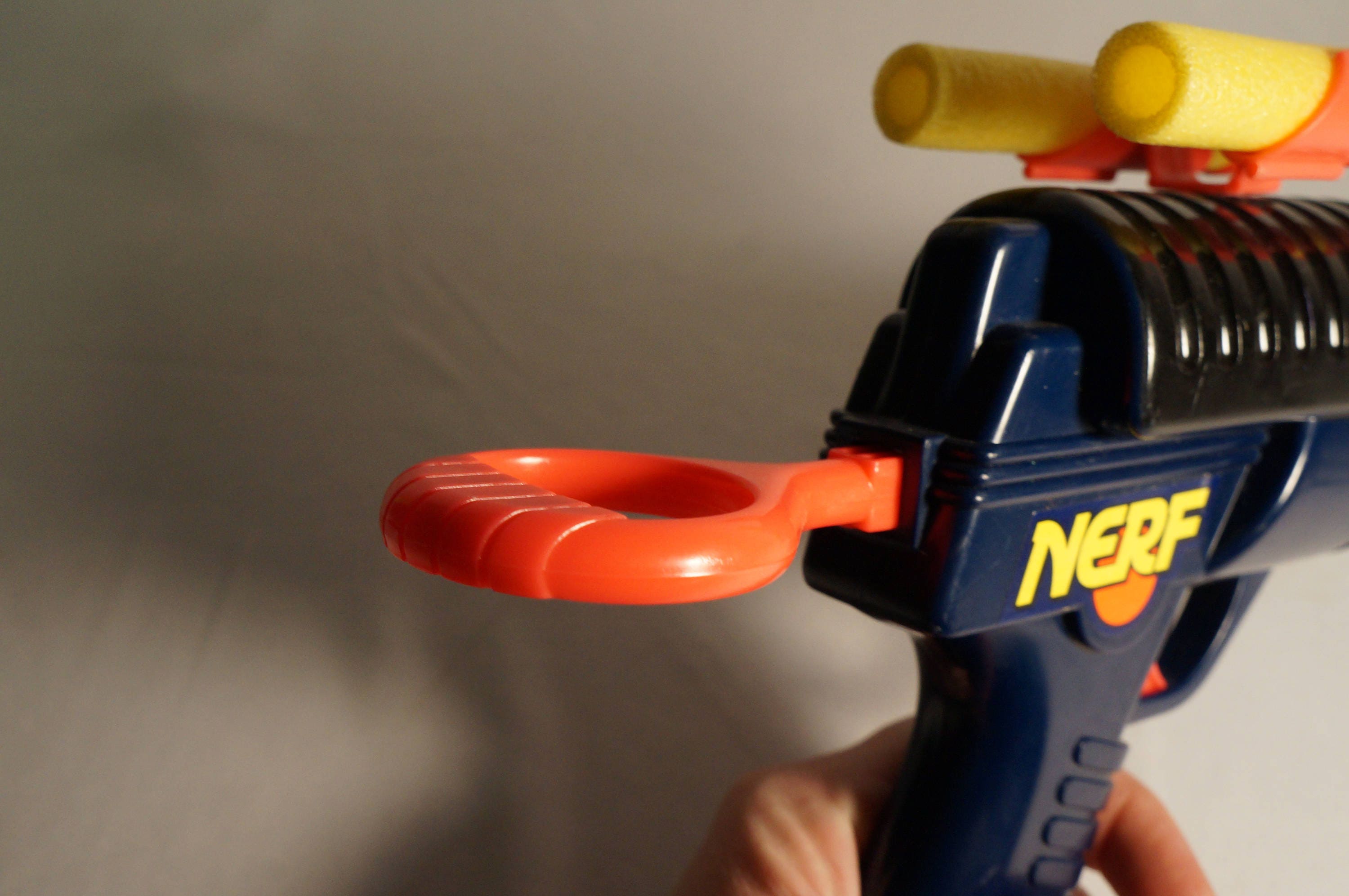 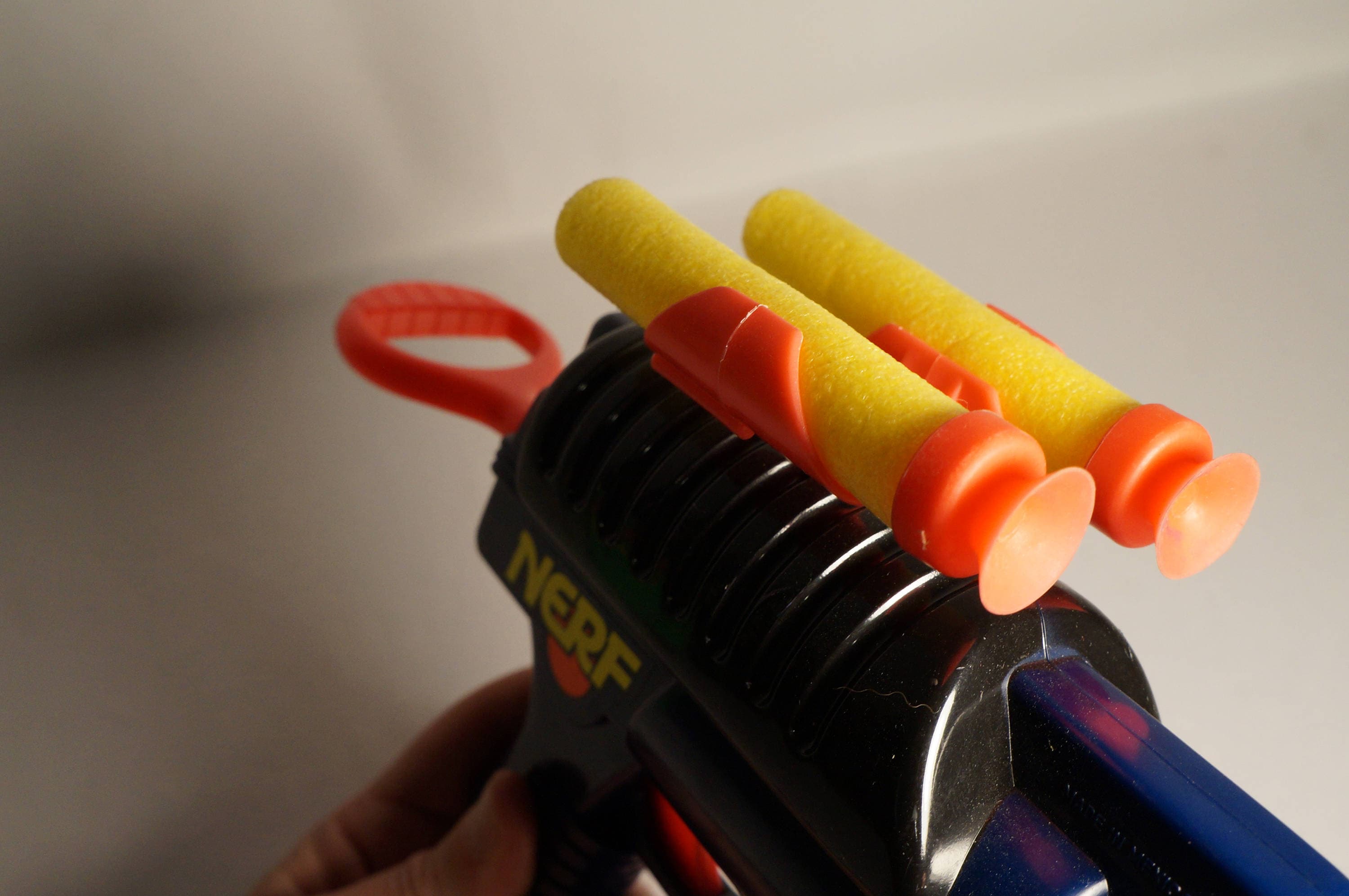 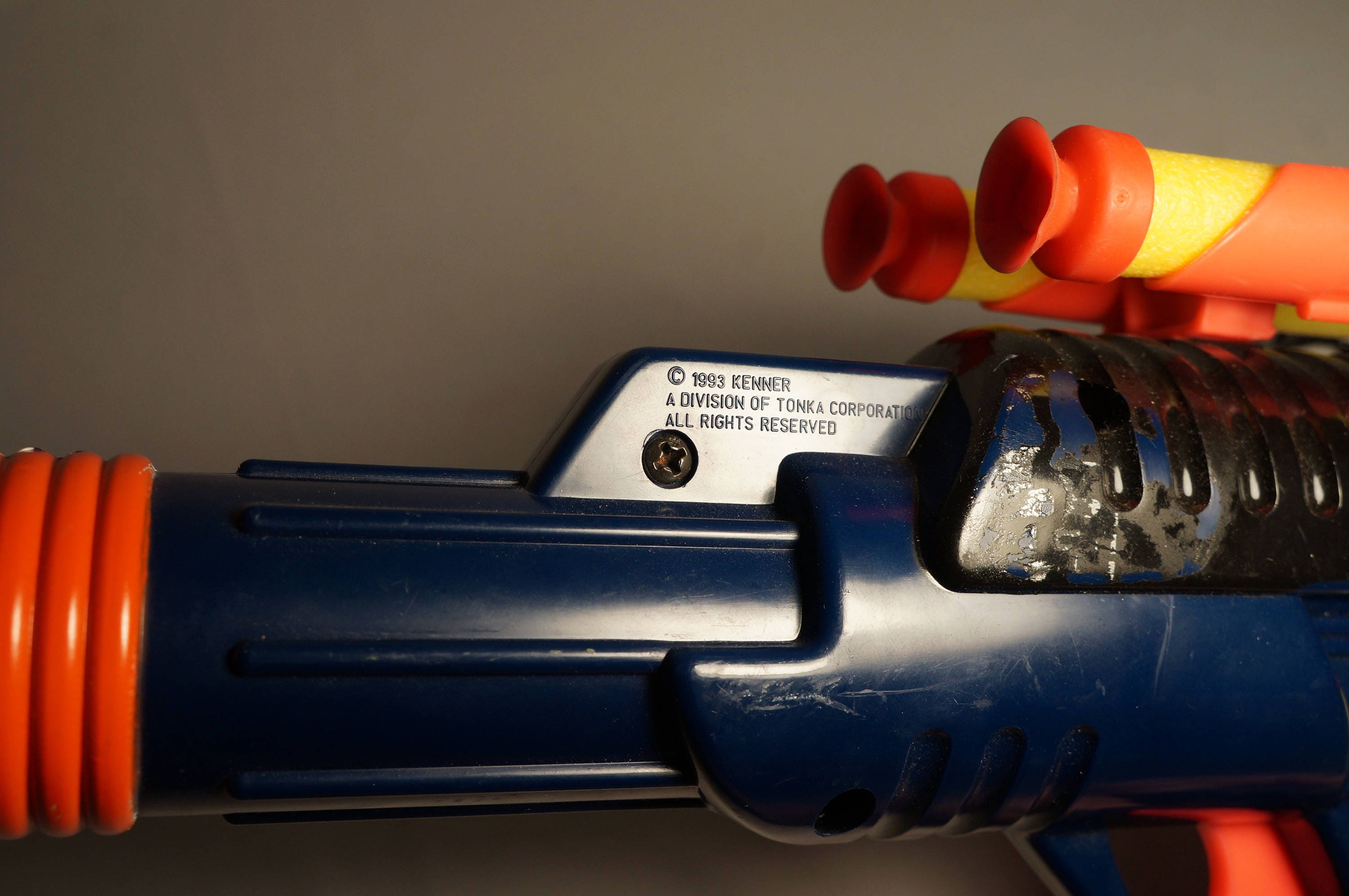 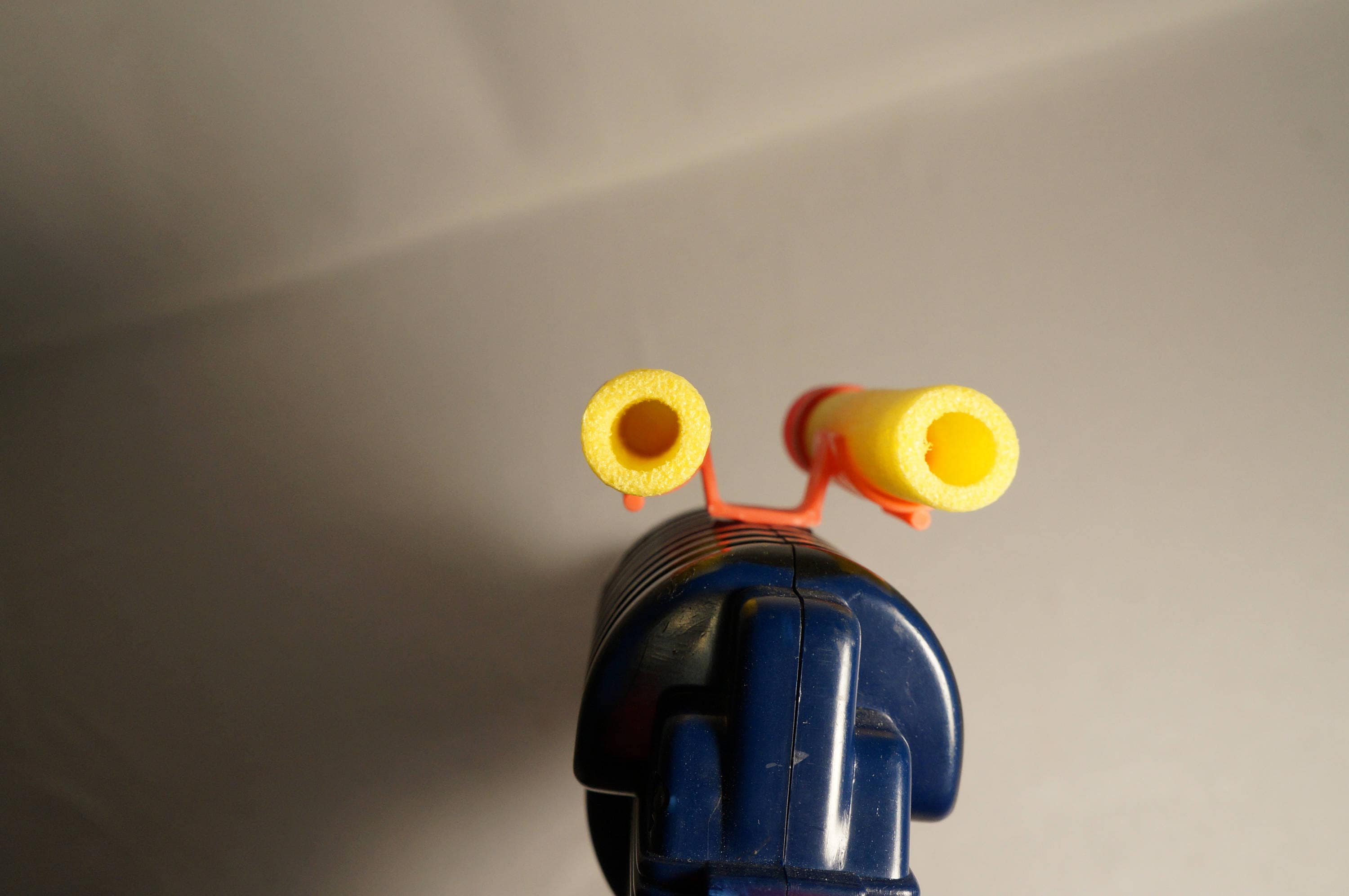 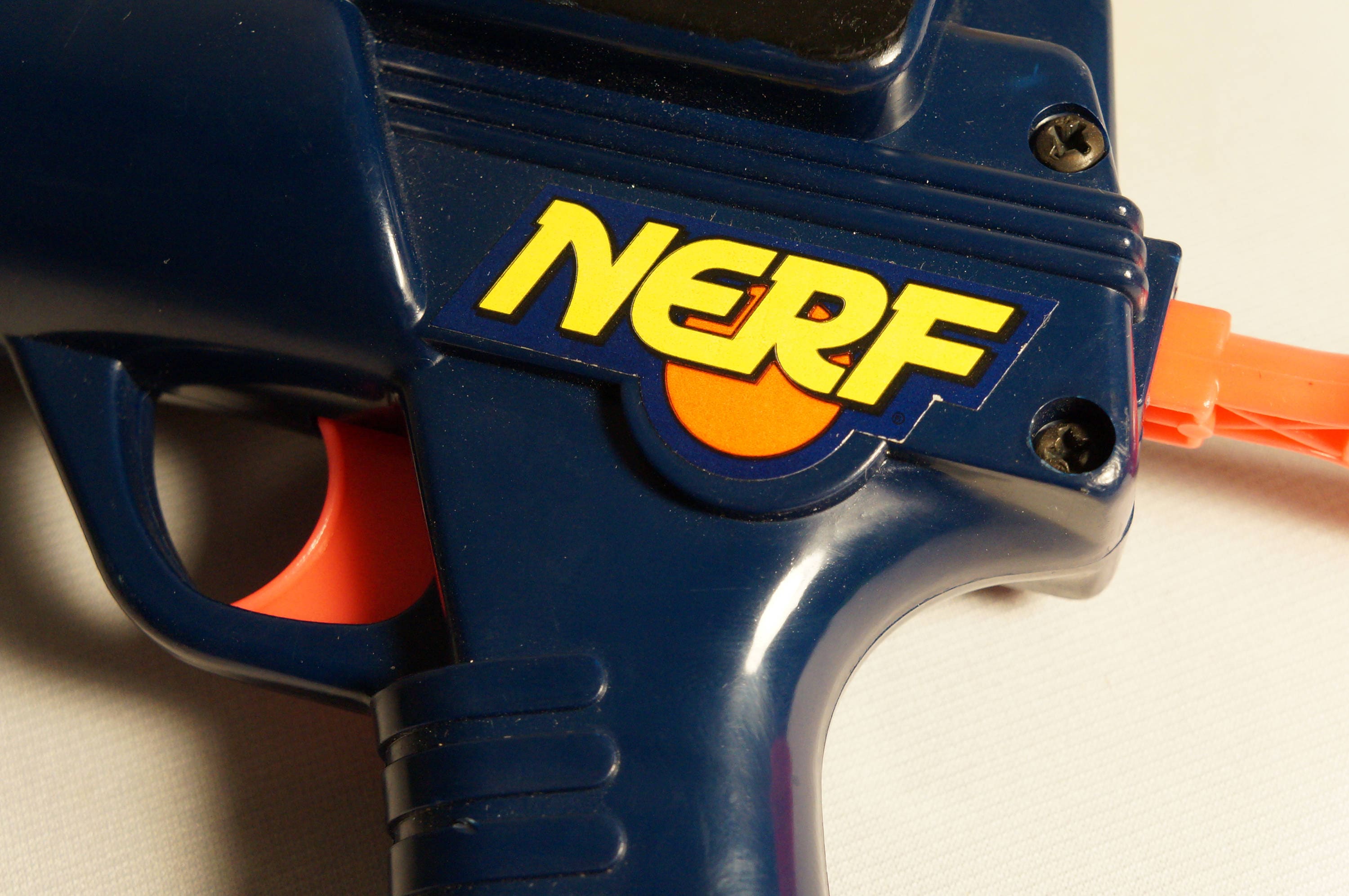 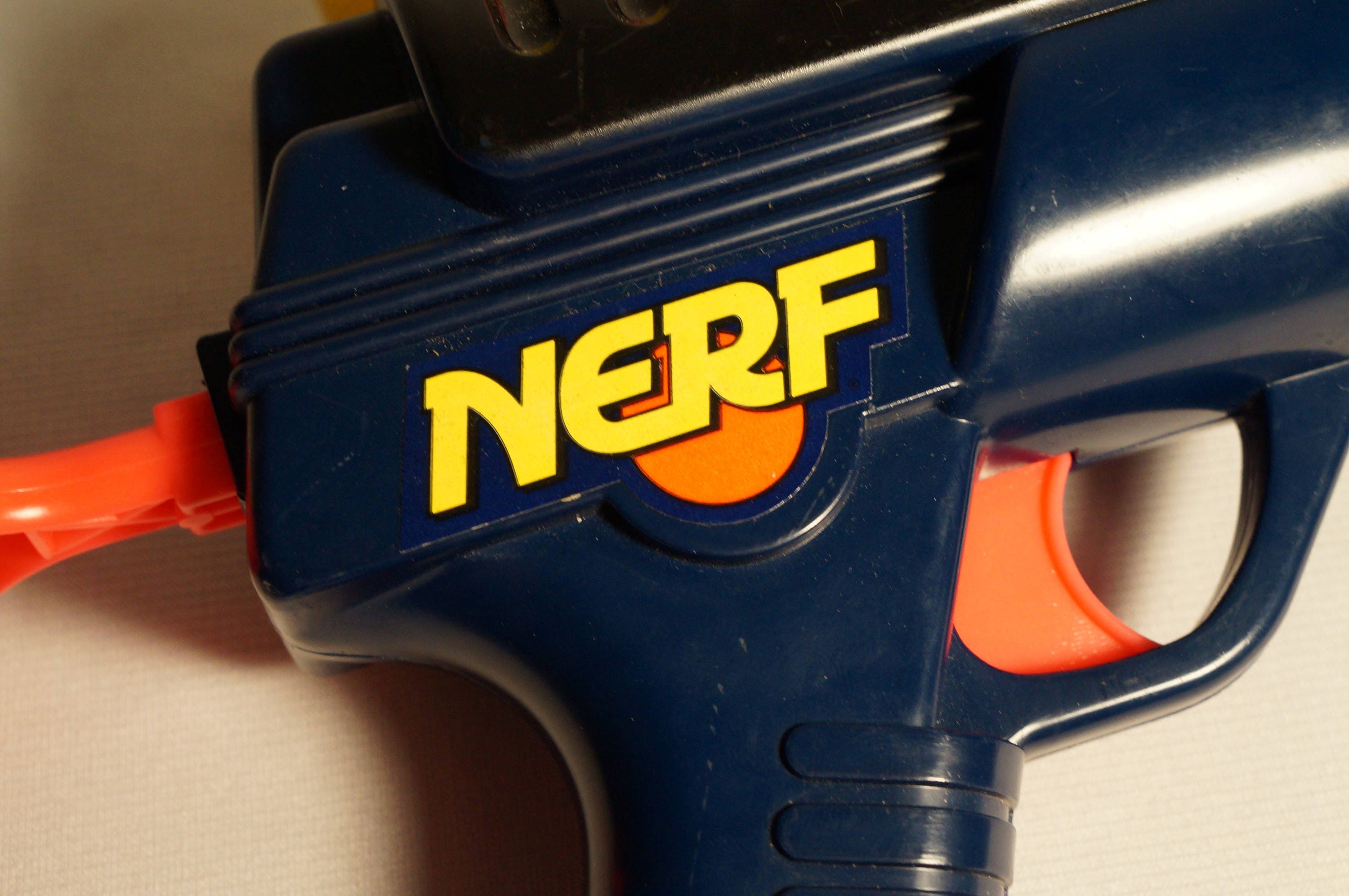 Some scratches and wear, two ORIGINAL darts in great condition, no cracks or breaks. This is the granddaddy of all NERF dart guns. And this one has the all-important original darts.

Here's the backstory. We now have two pre-teen boys in our chaotic house. NERF guns are huge. Next to LEGOs (many thanks to Ole Kirk Christensen), NERF guns are everything to our boys. So this got us wondering . . . when did NERF guns come out? We decided to explore this subject and put up some memories for everyone to reminisce and enjoy.

Anyhow, WE certainly didn't grow up with NERF guns. Born in 1972, I distinctly remember getting NERF foam balls in their little boxes and thinking this was amazing stuff. Then footballs, and basketballs, daaaaaaaaaam! We had no idea. The first NERF ball blaster was made in 1989 while I was filling out college applications, fully nineteen years after the creation of the humble NERF Ball of my youth. I missed the boat on the whole NERF gun thing til my kiddos now. But I have seen the light!

Anyhoo, the first NERF device to fire a round of any kind was the 1989 Blast-a-Ball, which fired balls by pumping the carrying handle forwards. NERF released a sequel blaster the next year, which held more balls than the Blast-a-Ball. Ball blasters became a staple of the Nerf arsenal at that point in time. In '90 NERF introduced its first missile/non-ball firing toy, a Bow 'N Arrow set. (We'll have those up, too, along with some NIP arrow ammo.)

The Bow 'N Arrow was a hit, so NERF went all in in '92 with the release of its first "gun," so to speak. The first NERF blaster to use a form of dart was this baby, the Sharpshooter, a 50s-sci-fi-looking pea shooter which fired foam darts with small fins on the ends. The Sharpshooter proved to be incredibly popular, and began NERF's production of dart blasters, or "guns" such as those over which I am constantly tripping all over our house.
A great and mandatory addition to your NERF collection!