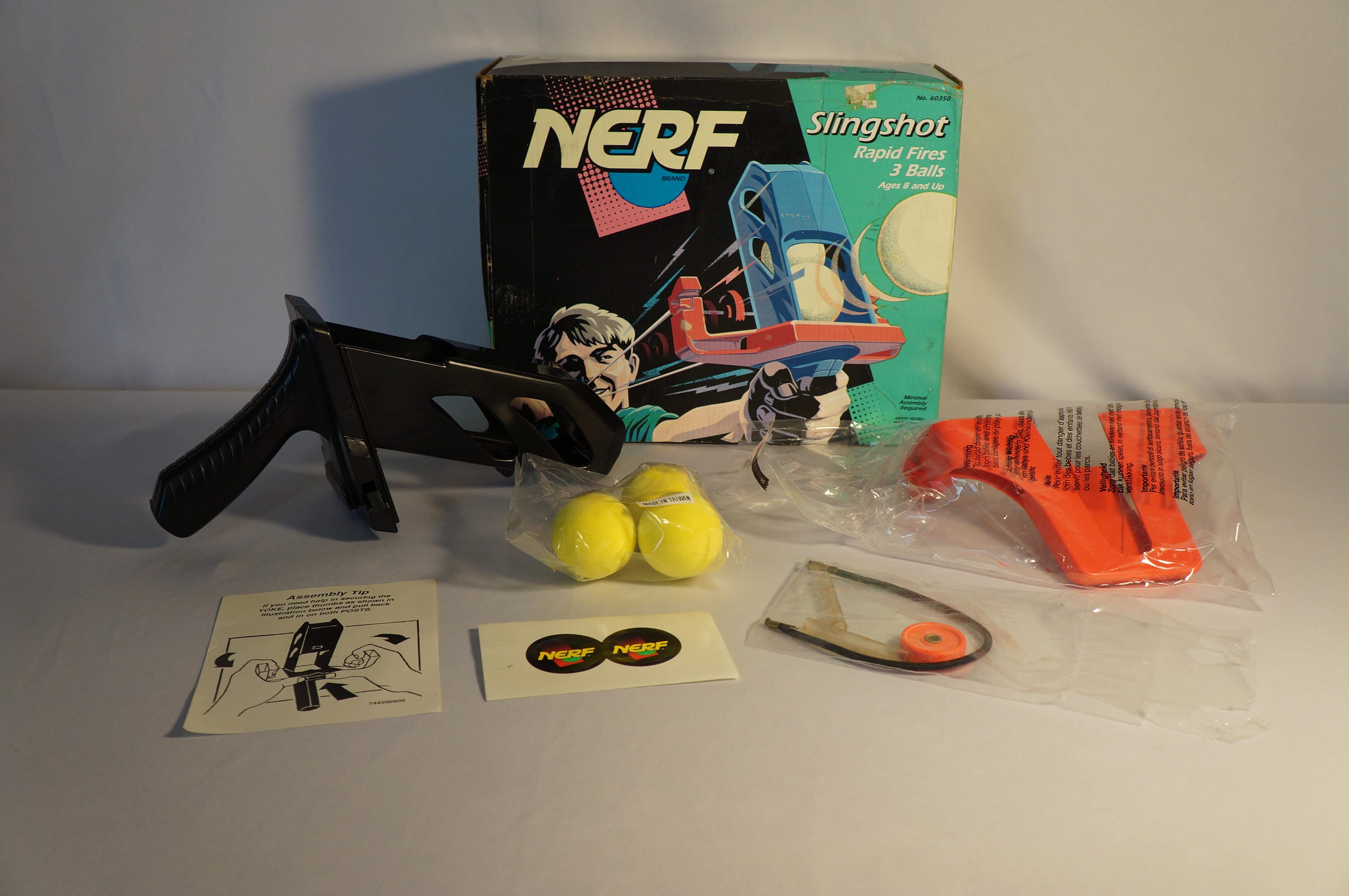 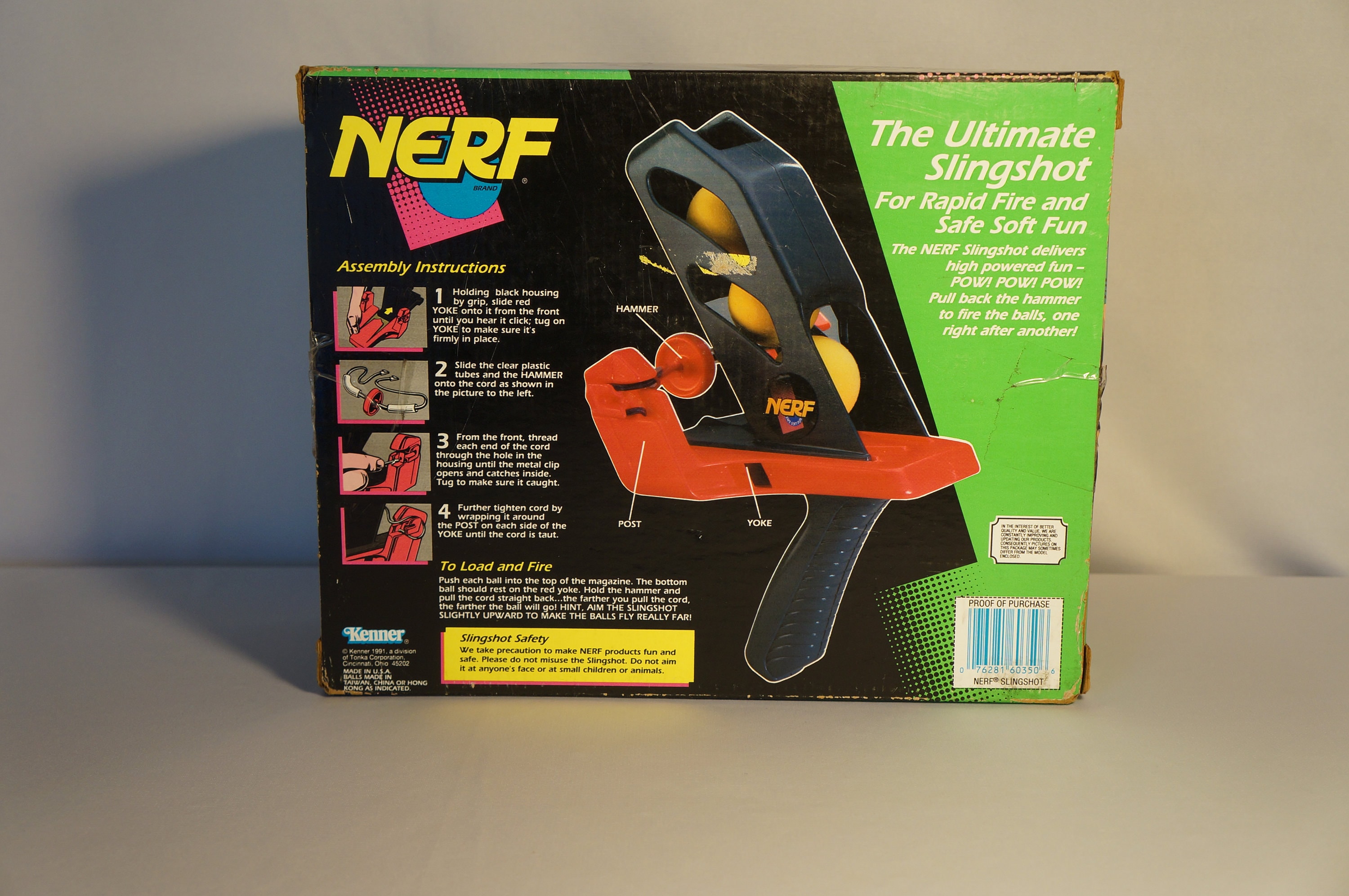 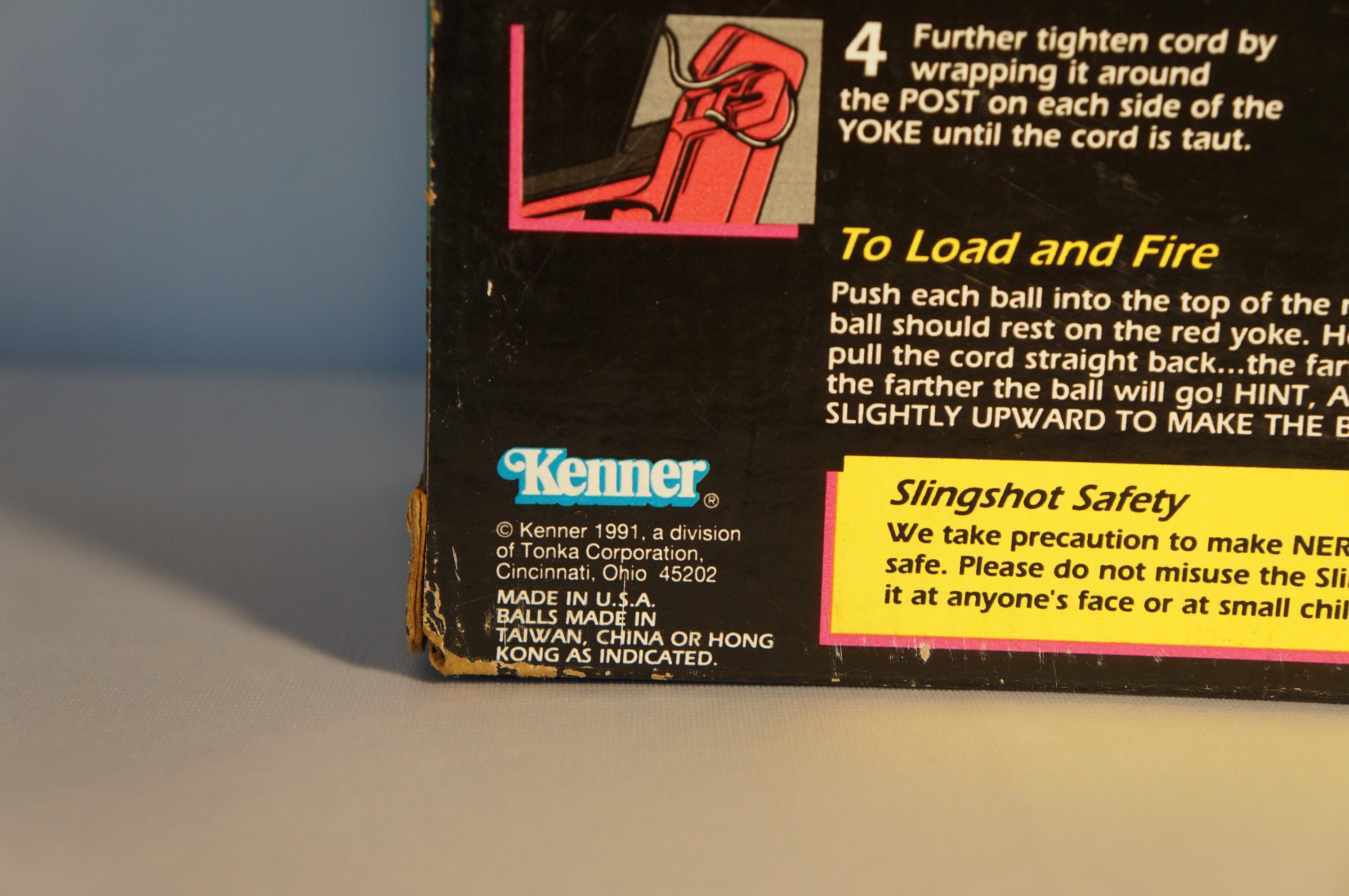 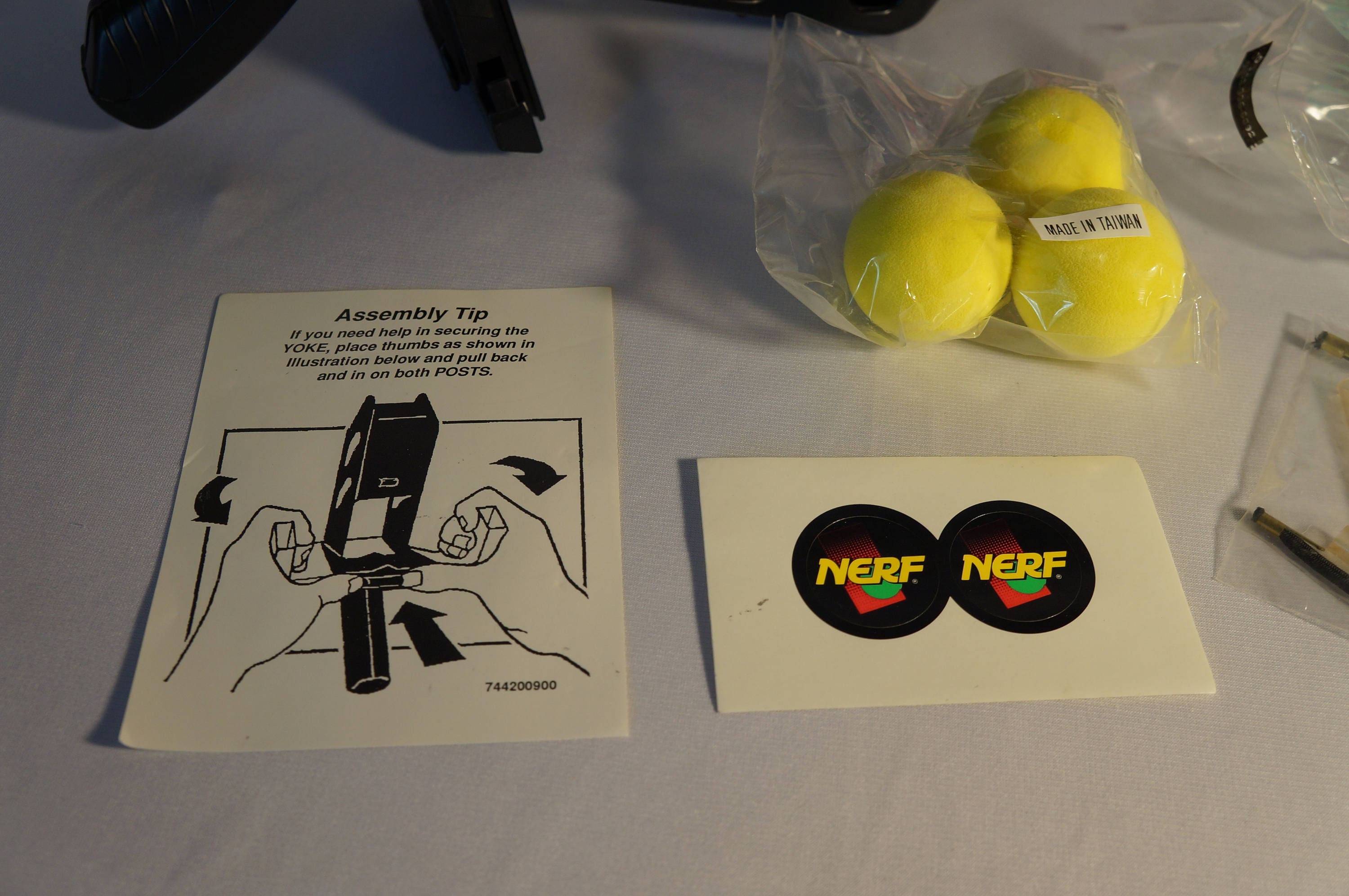 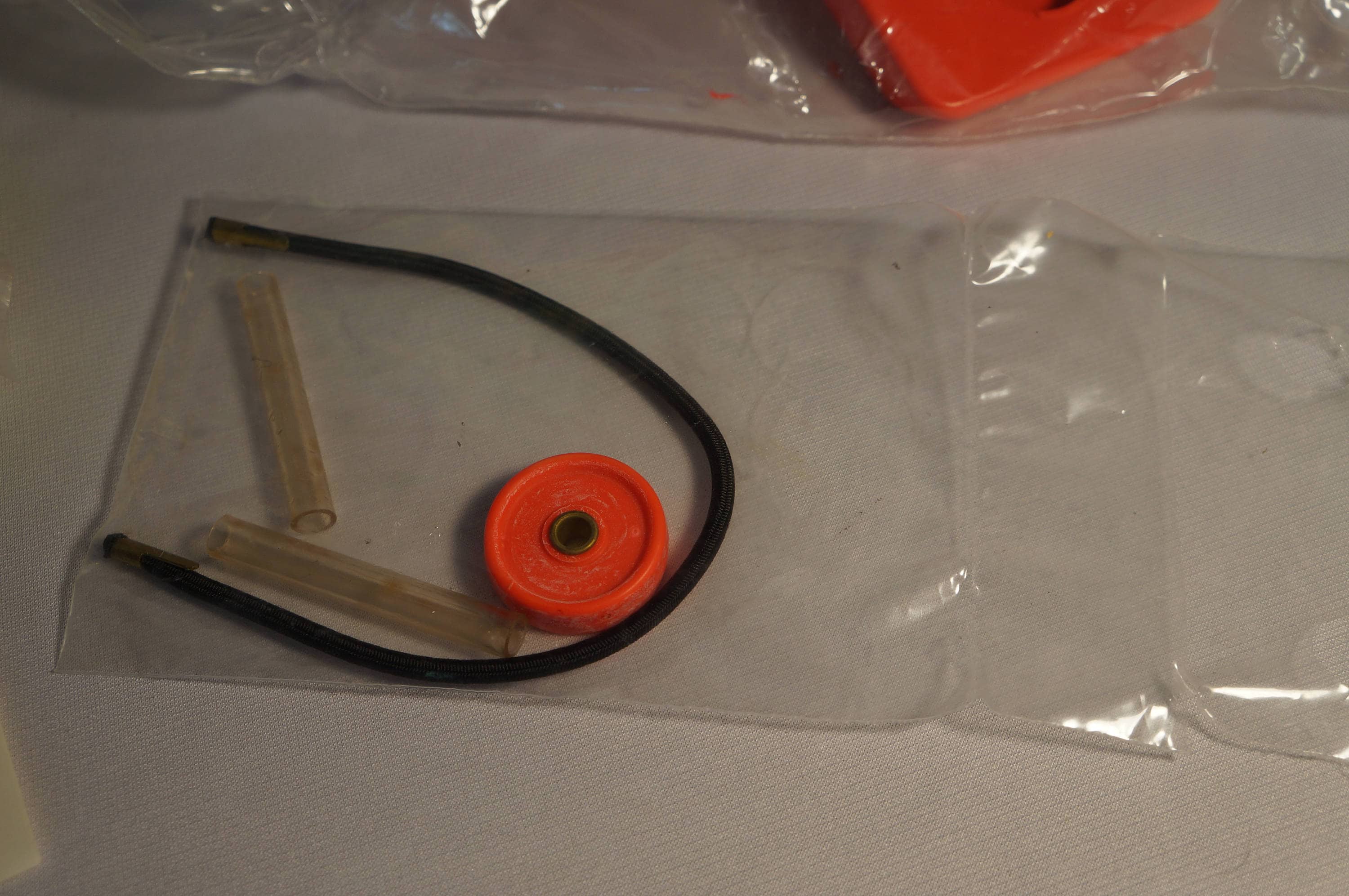 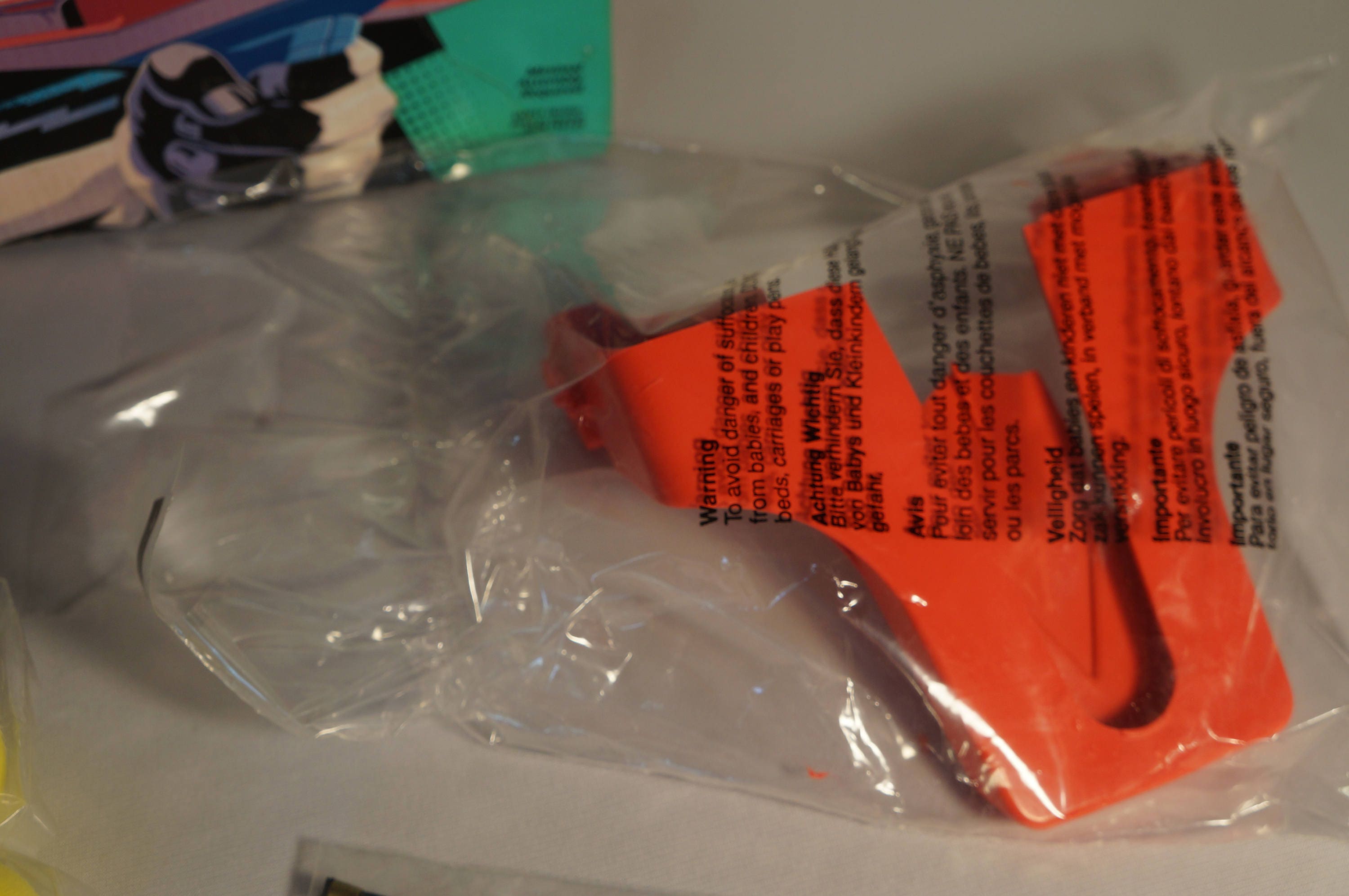 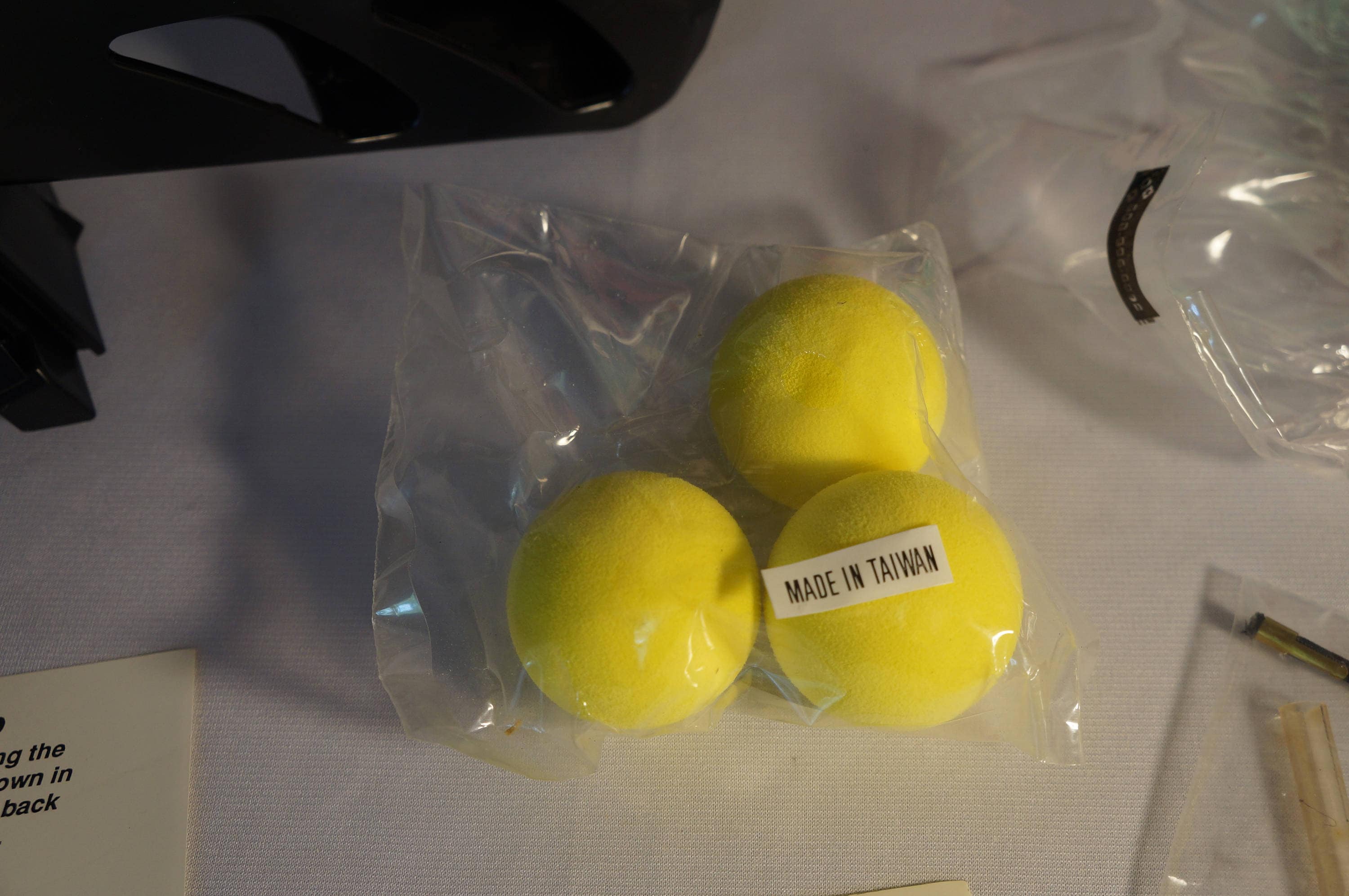 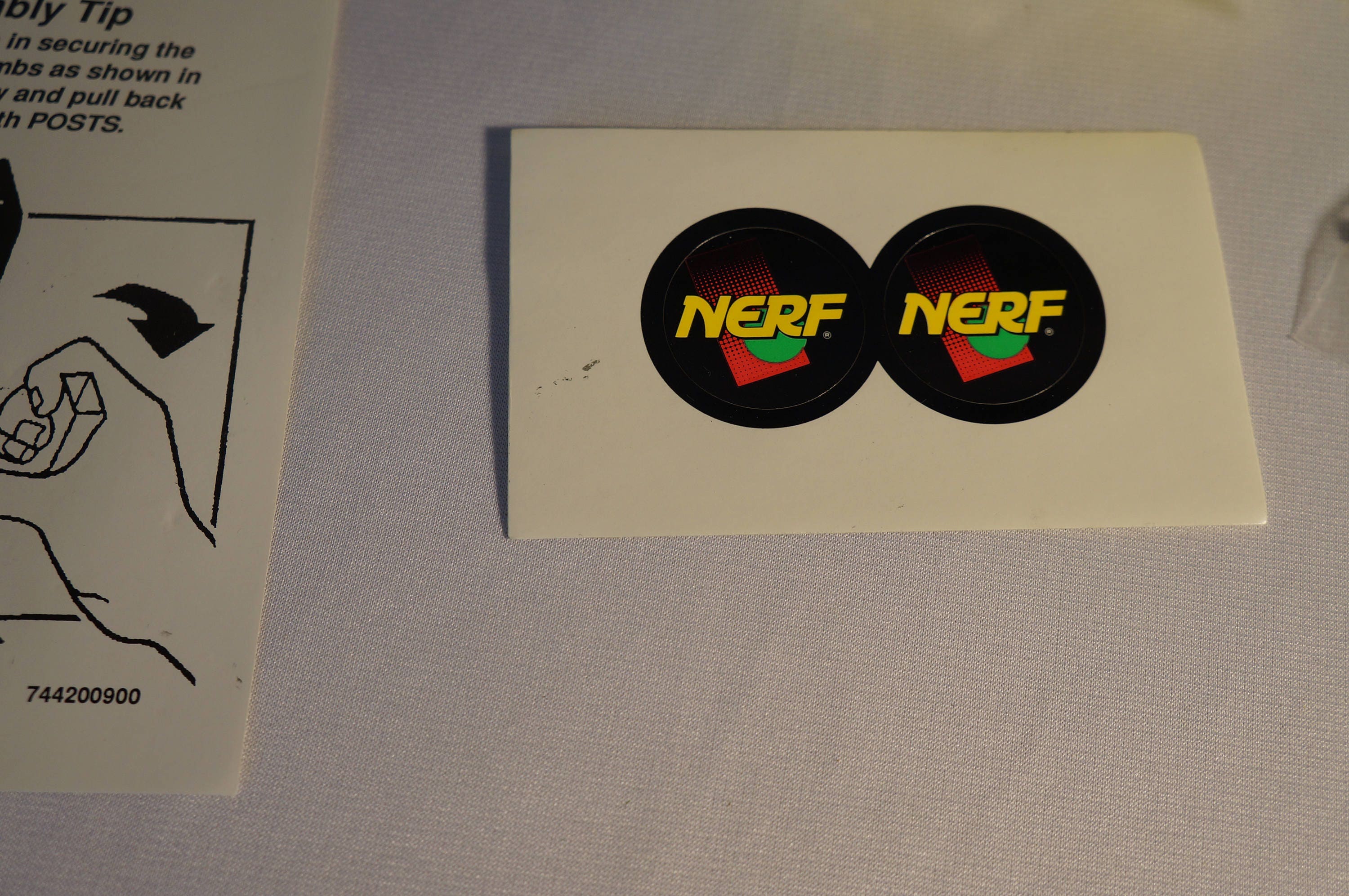 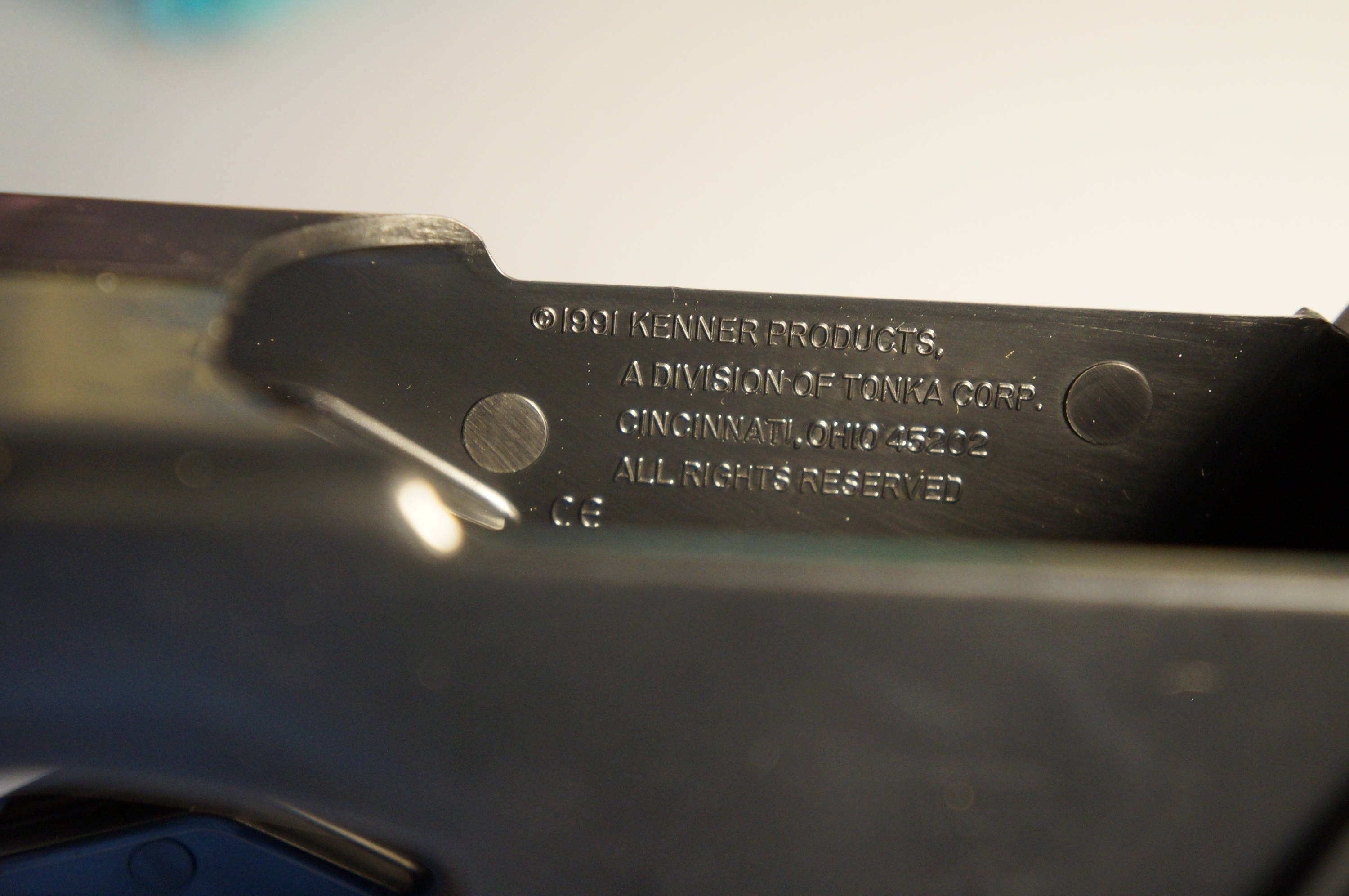 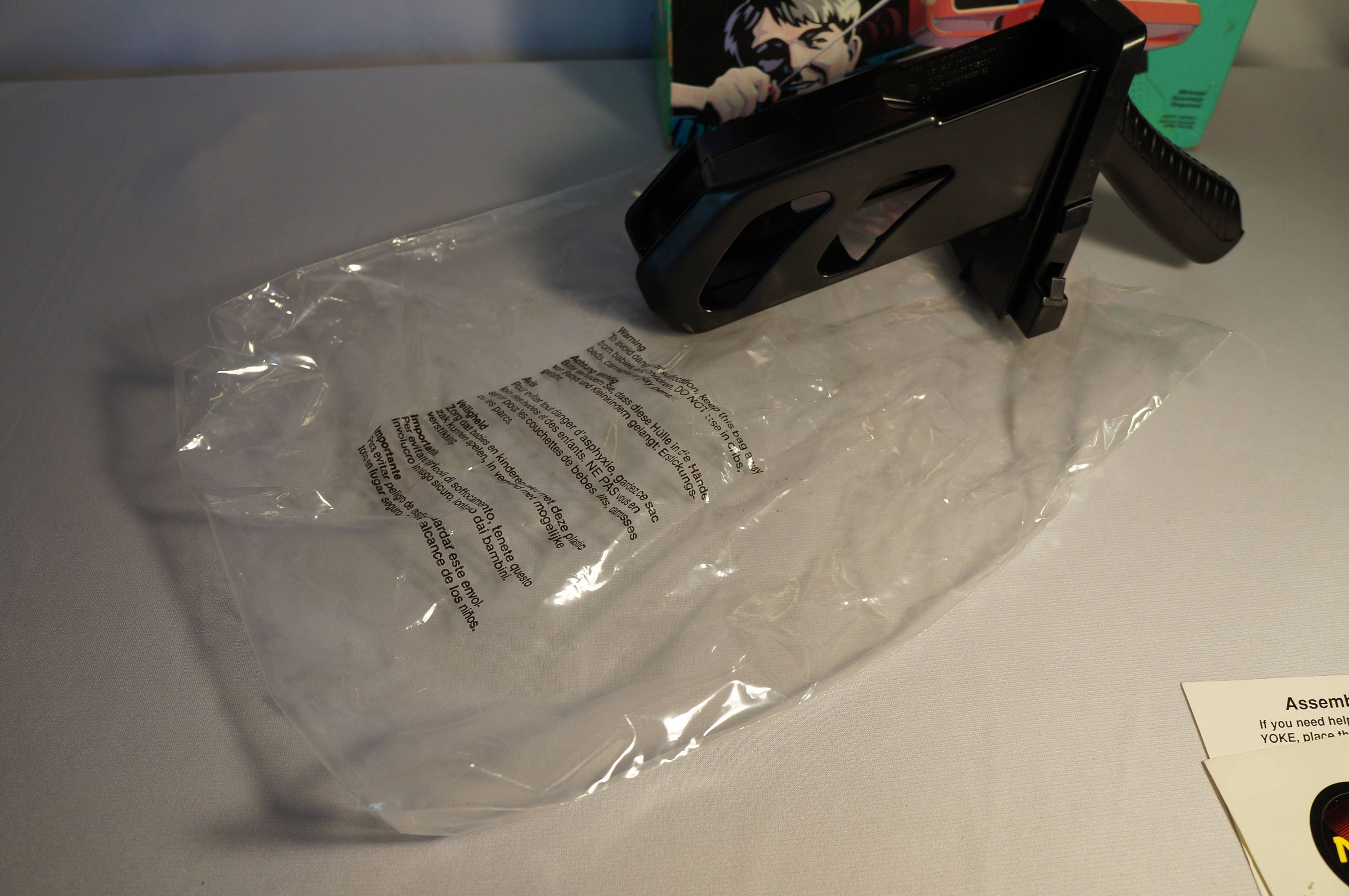 Minty and new in box, sealed parts, never put together or fired! Box has minor wear. This is one of the very first projectile toys NERF released. Here's the backstory. We now have two pre-teen boys in our chaotic house. NERF guns are huge. Next to LEGOs (many thanks to Ole Kirk Christensen), NERF guns are everything to our boys. So this got us wondering . . . when did NERF guns come out? We decided to explore this subject and put up some memories for everyone to reminisce and enjoy.

Anyhoo, the first NERF device to fire a round of any kind was the 1989 Blast-a-Ball, which fired balls by pumping the carrying handle forwards. NERF released a sequel blaster the next year, which held more balls than the Blast-a-Ball. In '91 they released this sweet SlingShot. In fact, ball blasters like this became a staple of the Nerf arsenal at that point in time. We will have a number of examples, both boxed and loose, up on the site in short order. Back to the history . . . In '90 NERF introduced its first missile/non-ball firing toy, a Bow 'N Arrow set. (We'll have those up, too, along with some NIP arrow ammo).

NERF continued to make ball-firing devices for a little while thereafter, including this '91 Slingshot, the '94 Ripsaw Blaster, etc. NERF went all in in '92 with the release of its first "gun," so to speak. The first NERF blaster to use a form of dart was the Sharpshooter, a 50s-sci-fi-looking pea shooter which fired foam darts with small fins on the ends. The Sharpshooter proved to be incredibly popular, and began NERF's production of dart blasters, or "guns" such as those over which I am constantly tripping all over our house.

Missiles had less of an impact on the product line in the early '90s, so are comparatively more rare. Very few NERF blasters, such as the Missilestorm, NB-1 Missile Blaster, this here '93 Pocket Rocket, and the 1994 Nerf Action Switchfire, were compatible with NERF's missiles. (We'll have examples of most of those up soon as well.) The majority of these missile shooters also received very negative reviews, leading to their demise in favor of arrow- or dart-firing blasters. The ball shooters like this Slingshot also quickly fell by the wayside once the demand for NERF "guns" took off in '92. So this here Slingshot is in its original box, nicely sealed parts and clean papers, looks and displays well, and is a great addition to your collection!