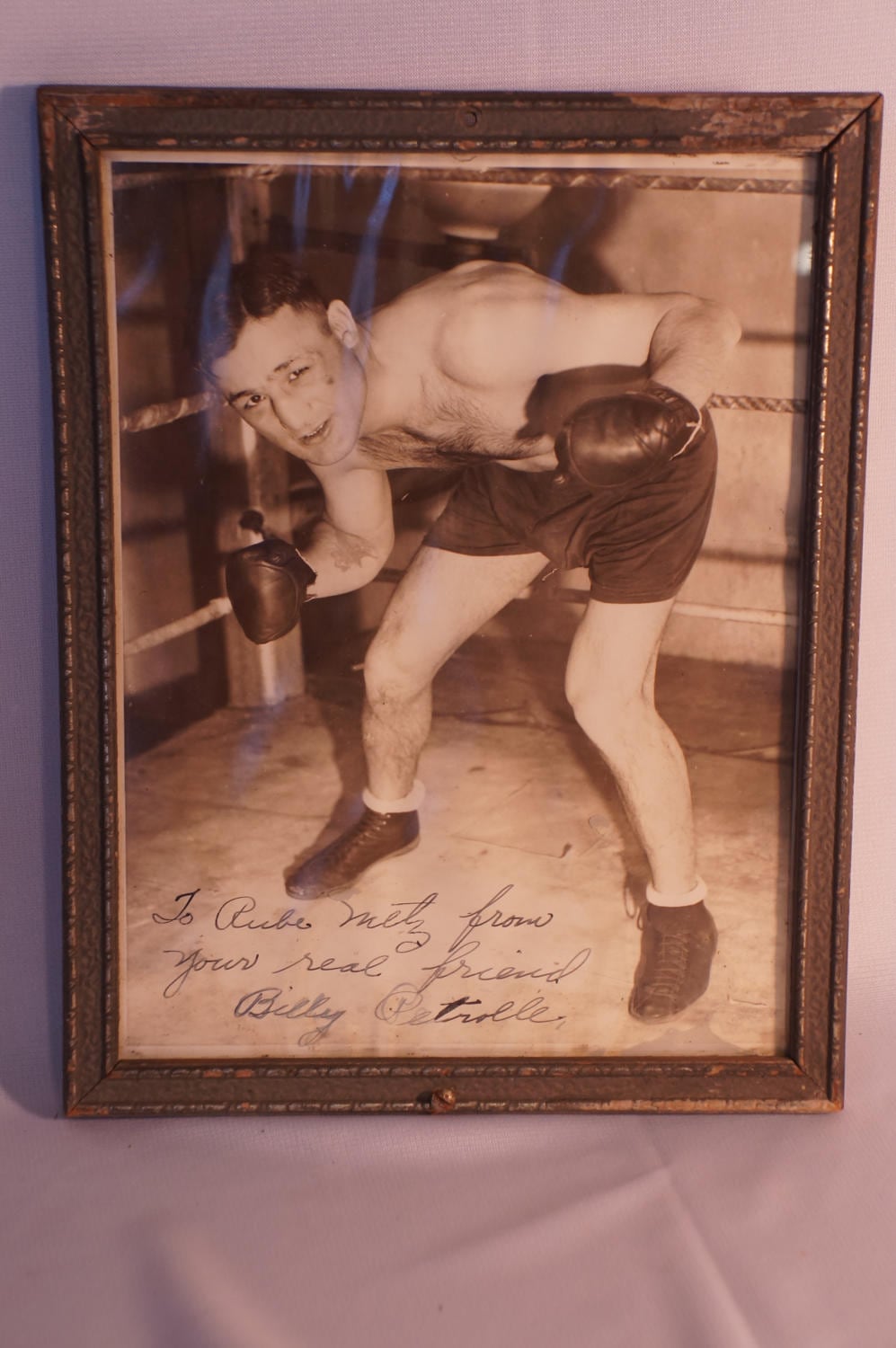 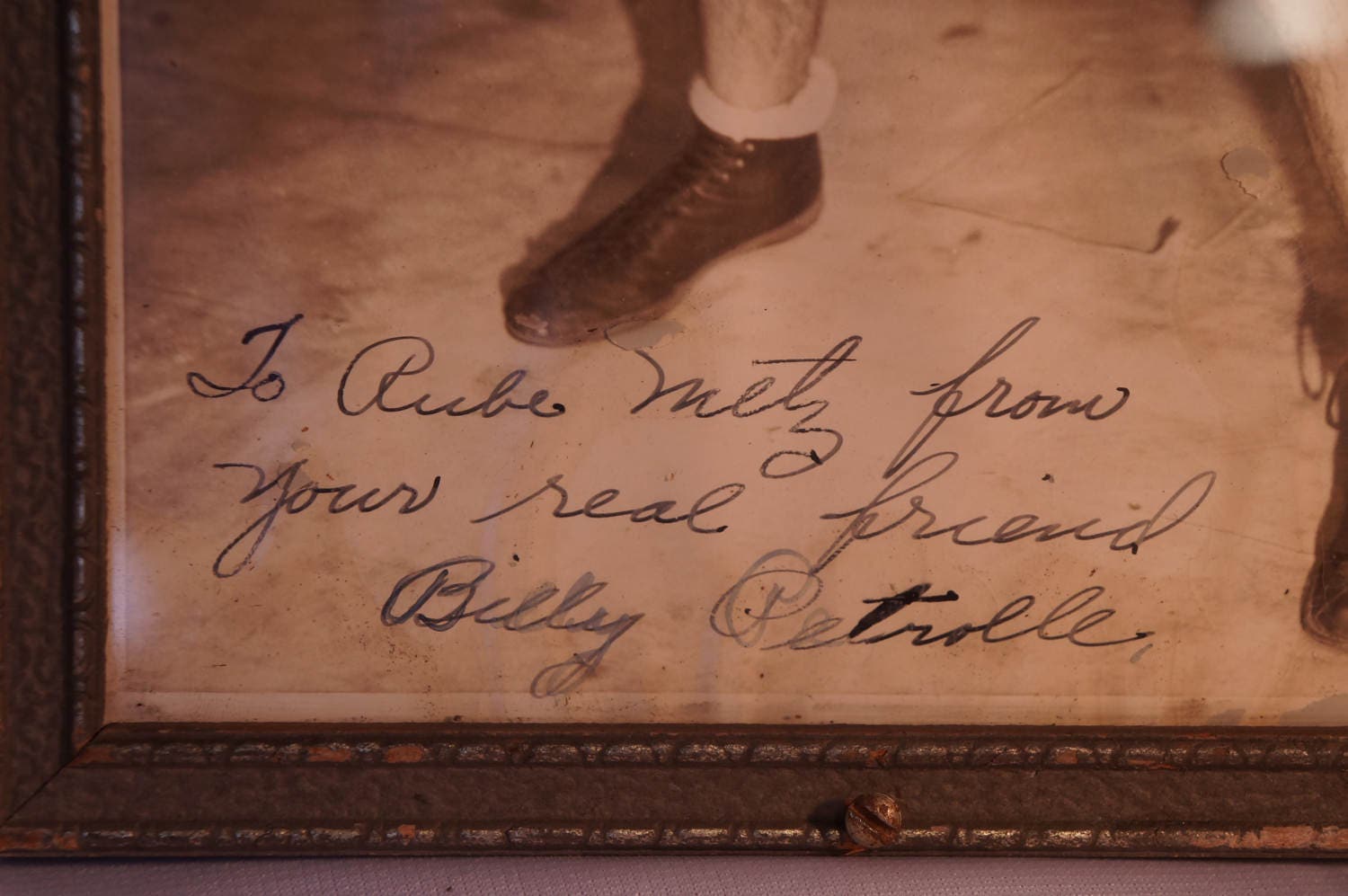 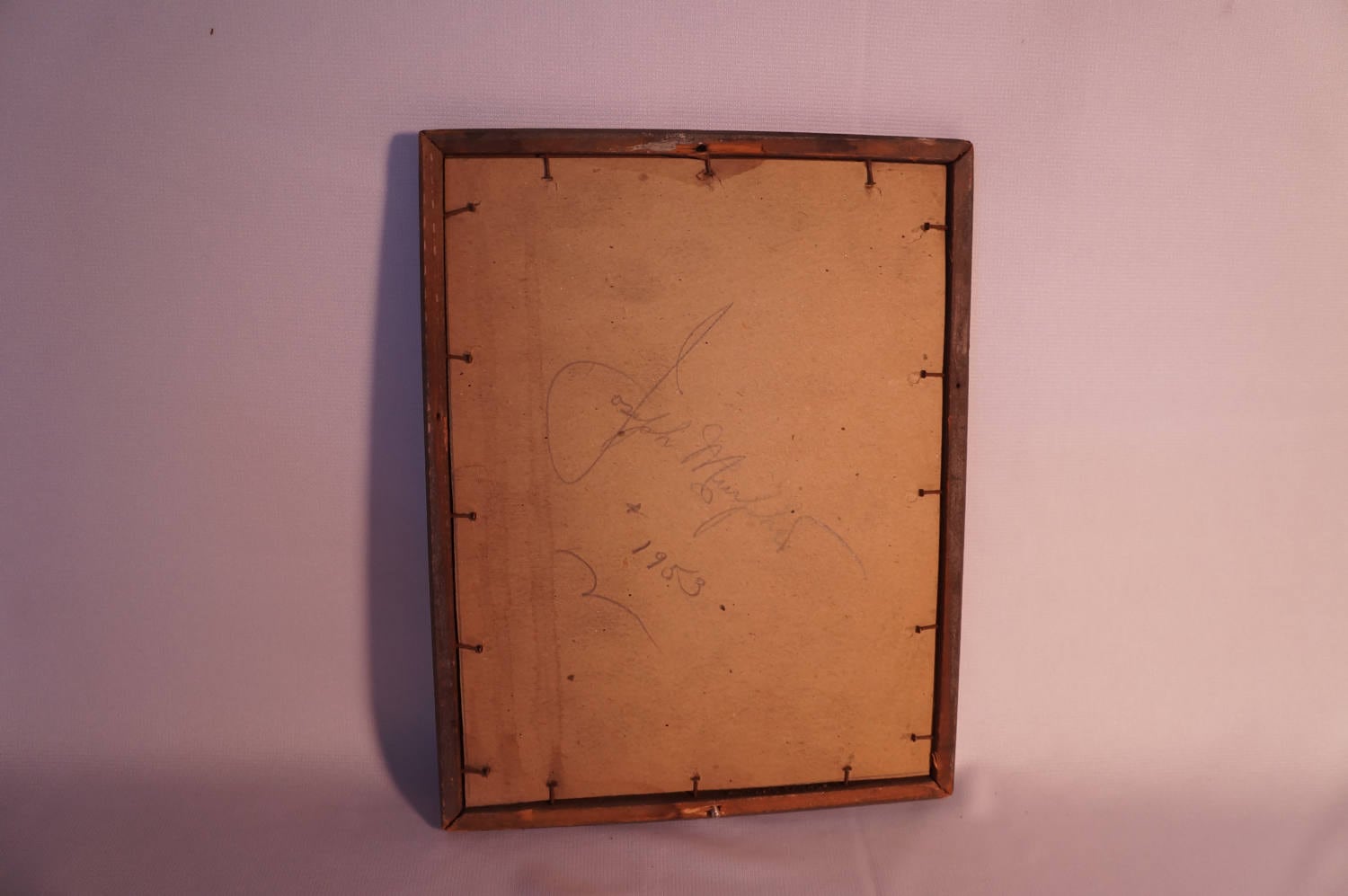 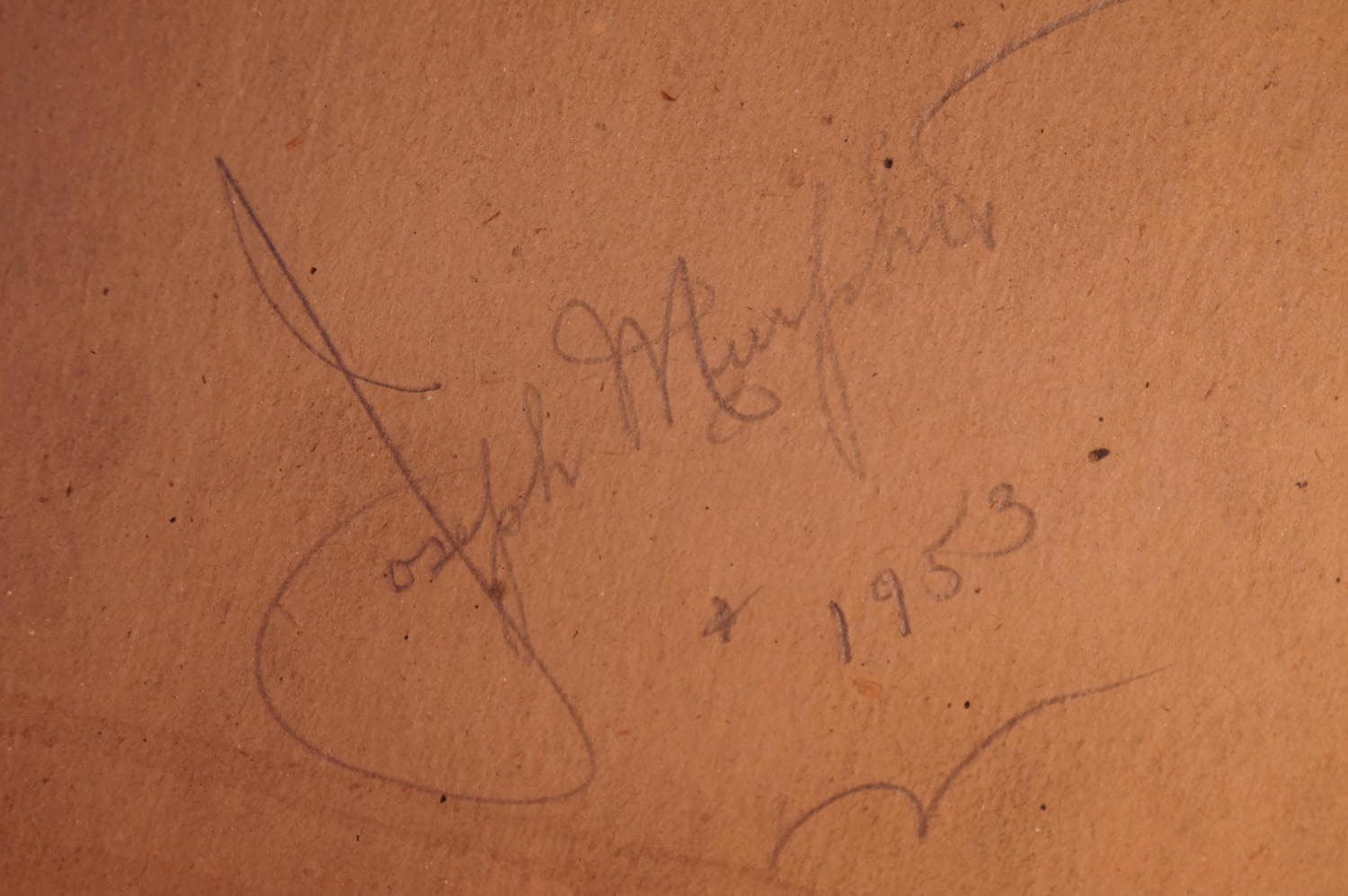 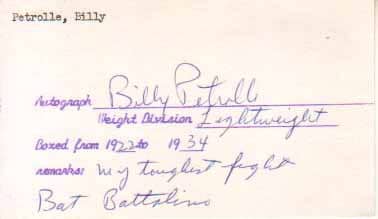 Just look at that mug!!!

6" x 8" picture in a 7" x 9" frame. Frame is vintage and came in it. I did not take the picture out, as I do not want to damage the photo. The autograph reads "To Rube Metz from your real friend Billy Petrolle." Brett acquired this from an antique shop in Lemont, IL around 1991. Please read the history we researched below.

This Photograph is filled with awesome history and ties in 3 people, Billy Petrolle signs this (I have included a picture of Billy's signature from fighttoys.com for comparison) to Rube Metz, and then Joseph Murphy has signed and dated the back....Here is how they all tie together- Billy first. (they all fought in the same area, or judged)

Billy Petrolle was the brother of fellow boxers Pete Petrolle and Frank Petrolle. The family was from Schenectady, New York.
It had been reported that Petrolle had fought some 255 career bouts. (He had at least one early bout under the name of "Wolf Larson" (Aug. 4, 1923), according to the Spokane Spokesman-Review (Spokane, WA, USA) newspaper, Aug. 14, 1923, p. 15.)
Petrolle graced the covers of The Ring Magazine in May 1927, March 1931, and May 1932. An article on him appeared in the July 2008 issue.
Petrolle (pronounced Pet-troll; others say Pet-TROL-Lee) was born in Pennsylvania, but later moved to Dilworth, Minnesota where he resided, yet fought mostly out of the much larger neighboring city of Fargo, North Dakota where his early career began with manager, Jack Hurley and Hurley's stable of fighters. The stable was briefly moved to Sioux City, Iowa in 1924, but while fighting in Duluth, Minnesota that same year, Petrolle fell in love with the city and found his future wife there as well. He moved there in late 1924 and resided there the rest of his life. Though his early nickname of the "Fargo Express" forever remained with him, the fact is that he never lived in North Dakota at all. In an article in the Duluth Tribune, Billy said, "I was always called the Fargo Express, but I only fought in that area for a couple of years. I met my wife in Duluth after a fight there in 1924 and moved there and remained there for the rest of my career." As Hurley's biggest draw, Hurley followed Billy to Duluth, as did Charley Retzlaff, where Hurley also managed the career of Duluth's Angelo Puglisi.
Petrolle retired during the Great Depression after making some $200,000 in ring earnings, and owning an iron foundry in Duluth, Minnesota. He later owned a religious goods and gift shop in Duluth, and was the chairman of the Board of Directors of the Pioneer National Bank.
He is a 2013 inductee into the Minnesota Boxing Hall of Fame.

Joseph Murphy (boxer) (gentleman that signed the back)

He was born Feb. 21, 1917, in Trimble County, Ky., the son of William and
Effie Tingle Murphy. He had been a professional boxer as a young man, and once
sparred with former world middleweight champion Ezzard Charles in Cincinnati,
Ohio. ( Ezzard was born in Lawrenceville, Georgia, but is commonly thought of as a Cincinnatian. Charles graduated from Woodward High School in Cincinnati where he was already becoming a well-known fighter. Known as "The Cincinnati Cobra", Charles fought many notable opponents in both the light heavyweight and heavyweight divisions, eventually winning the World Championship in the latter. Although he never won the Light Heavyweight title, The Ring has rated him as the greatest light heavyweight of all time. He also once fought a semi-championship bout with Tommy Arden of
Louisville, Ky.) Back to Joe......He was a former employee of the Oscar Meyer Co. and retired from
Peter Hand Brewery in Chicago. He moved to the Canaan area and lived there
from 1972 until 1997, when he moved to Madison. He was also a farmer and loved
doing yard work.

This would be an awesome piece of history for a boxing fanatic.