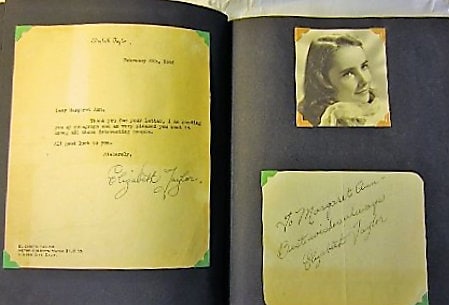 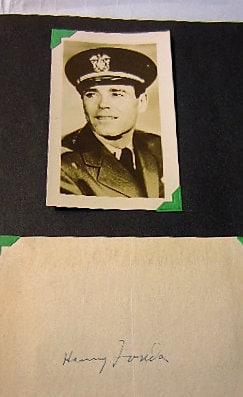 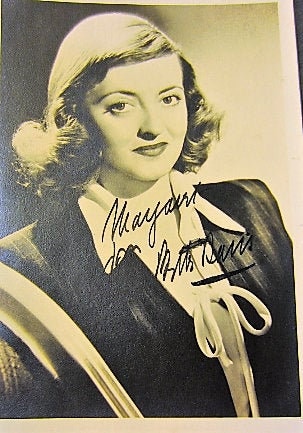 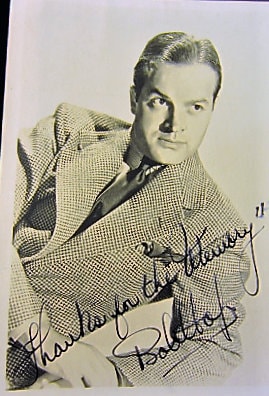 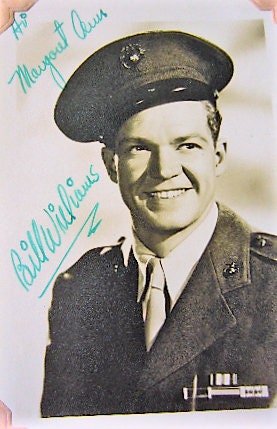 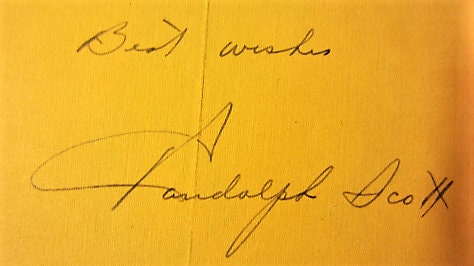 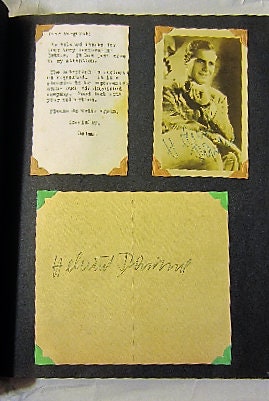 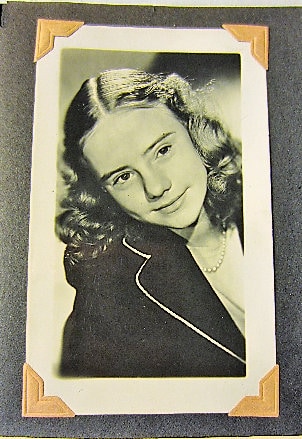 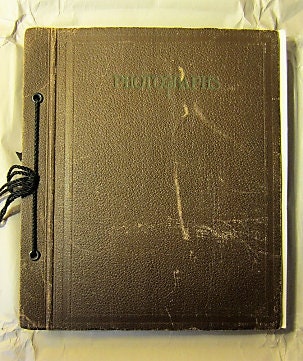 This is one of our cooler treasures. It is a walk back in time to several years of a little girl's life in frosty Michigan in the 30s and 40s, dreaming of glamorous, sun-baked, far-off Los Angeles and Hollywood, the silver screen, the bright lights, the big stars!!! She wrote to a host of Hollywood legends, and got some fantastic returns which she included in this here autograph book. This collection includes rarities, such as the glossy, monograph, letterhead, and signature of Elizabeth Taylor when she was 14 years old under a one-year-only contract with that studio, Bette Davis (priceless), Gregory Peck, Henry Fonda, Bob Hope, and on and on. It's an autograph book that reads like the legendary autographed Brown Derby in Hollywood. Some of the glossies she got back were inscribed personally to her. One can imagine how thrilling this was for her growing up in Michigan in a way and from a time that simply can't be replicated. She couldn't just #tweet with her Hollywood heroes, this all by hand and snail mail baby. She was also a fan of the Detroit Tigers, so she got some of them, too. There are 25+ signatures, and we have pictures of each page. We really are blown away by the signatures that this lady acquired in her life time. It is an amazing compilation!

William Holden - Actor, Oscar for Best Actor "Stalag 17," - Personal Autograph, glossy Military portrait with facsimilie autograph - Holden also appeared in Wild Bunch, Towering Inferno, Sunset Boulevard, Bridge over the River Kwai - #25 AFI top 100 movie stars of all times. As with so many other Legends of his era, Mr. Holden also suspended his successful Hollywood career to serve during World War II. He served in the U.S. Army Air Corps from 1942-1945. His brother, a U.S. Navy pilot, was killed in the Pacific in 1944.

Henry Fonda - Military still and Autograph. It doesn't get any better than this, Henry Fonda as a dashing young sailor in uniform in World War II, in the midst of a legendary film career and the spawning of several more legendary film careers. True Hollywood romance here. Fonda's service in World War II should not be understated, and we are glad that this photo depicts him in uniform. Fonda served aboard a destroyer in the Pacific and earned a Bronze Star for Valor!

U.S. President Lyndon Johnson honored Peck with the Presidential Medal of Freedom in 1969 for his lifetime humanitarian efforts. In 1999, the American Film Institute named Peck among Greatest Male Stars of Classic Hollywood cinema, ranking him No. 12.

Helmut Dantine - Actor - Typed personal letter, Autographed photo, cut autograph - Dantine was almost typecast as a Nazi in his films, from his portrayal of the desperate Luftwaffe pilot in the Humphrey Bogart classic Casablanca, to a Nazi officer in Edge of Darkness, though he played many other roles as well

Dame Elizabeth Taylor - Actress, Legend - Studio still, personal letter on her personal stationary, personal autograph and message. What to say about this. Two sigs from Liz! More legend material here, without saying. A Hollywood icon spanning decades. From a rosy-cheeked, innocent girl in National Velvet to her legendary romance with Richard Burton, Liz perhaps personifies Hollywood more than anyone else. She was an incredible actress, winning an Oscar for best actress in Butterfield 8. Cumulatively her body of work places her at number 7 on AFI's list of greatest actresses.

Virginia Grey - Actress - Autographed Pic, personalized - Here's an interesting study. Virginia was less known for her actual film rolls then for her stormy romance with Clark Gable, paired with her surprise Reformation in 58.
She had an on again/off again relationship with Clark Gable in the 1940s. After Gable's wife Carole Lombard died and he returned from military service, Gable and Grey were often seen at restaurants and nightclubs together. Many, including Virginia herself, expected him to marry her with the tabloids expecting a wedding announcement. It was a great surprise when he hastily married Lady Sylvia Ashley in 1949, leaving Grey heartbroken. Gable divorced Ashley in 1952. However, Gable never rekindled their romance and Grey's friends say that her hoping and waiting for Gable was the reason she never married. Regarding her faith, Grey adhered to Mormonism stating that, "I am a Mormon. Dad was and I was raised in that religion and during the '30s and '40s, I strayed and got into others things. I drank, I smoked, and did things totally opposite, not even thinking of what I had known during childhood."

Gary Cooper - Actor - picture/facimilie signature. Another true legend. Maybe THE male legend. Certainly enough for AFI to put him at 11th on the Top 25 male stars if all time. Gary Cooper (born Frank James Cooper; May 7, 1901 – May 13, 1961) was an American film actor known for his natural, authentic, and understated acting style and screen performances. His career spanned thirty-five years, from 1925 to 1960, and included leading roles in eighty-four feature films. He was a major movie star from the end of the silent film era through to the end of the golden age of Classical Hollywood. His screen persona appealed strongly to both men and women, and his range of performances included roles in most major movie genres. Cooper's ability to project his own personality onto the characters he played contributed to his appearing natural and authentic on screen. The screen persona he sustained throughout his career represented the ideal American hero.

Bette Davis - Autographed Photo and Autograph Card. Betty typified the legendary cattiness of Hollywood starlets more than anyone else. See for example her Feud with Joan Crawford in the series Bette and Joan. I'm not sure I'd want either as my mother, but both had a panoply of outstanding work.

Regarded as one of the greatest actresses in Hollywood history, she was noted for her willingness to play unsympathetic, sardonic characters (i.e., total Bs), and was famous for her performances in a range of film genres, from contemporary crime melodramas to historical and period films, suspense horror and occasional comedies, although her greatest successes were her roles in romantic dramas.

Bette Davis founded the Hollywood Canteen, and was the first female president of the Academy of Motion Picture Arts and Sciences. She won the Academy Award for Best Actress twice, was the first person to accrue ten Academy Award nominations for acting, and was the first woman to receive a Lifetime Achievement Award from the American Film Institute. Her career went through several periods of eclipse, and she admitted that her success had often been at the expense of her personal relationships. Married four times, she was once widowed and three times divorced, and raised her children as a single parent. Her final years were marred by a long period of ill health, but she continued acting until shortly before her death from breast cancer, with more than 100 film, television and theater roles to her credit. In 1999, Davis was placed second behind Katharine Hepburn on the American Film Institute's list of the greatest female stars of classic Hollywood cinema.

Debbie Reynolds - Actress - personalized autograph. America's sweetheart! Also, the mother of Carrie Fisher, and therefore the super goddess creator of Princess Leia! Debbie Reynolds had a successful run of over 50 years from dramatic roles to her more preferred musical and dance numbers. She then had a great success with her own dance studios in the 70s. But again, she created Princess Leia, so, enough said.

Robert Montgomery - Actor, played a psychopath in the chiller Night Must Fall (1937), for which he received an Academy Award for Best Actor nomination.

After World War II broke out in Europe in September, 1939, and while the United States was still officially neutral, Montgomery enlisted in London for American field service and drove ambulances in France until the Dunkirk evacuation. He then returned to Hollywood and addressed a massive rally on the MGM lot for the American Red Cross in July 1940.

Montgomery returned to playing light comedy roles, such as Alfred Hitchcock's Mr. & Mrs. Smith (1941) with Carole Lombard. He continued his search for dramatic roles. For his role as Joe Pendleton, a boxer and pilot in Here Comes Mr. Jordan (1941), Montgomery was nominated for an Oscar a second time. After the U.S. entered World War II in December 1941, he joined the United States Navy, rising to the rank of lieutenant commander, and served on the USS Barton (DD-722) which was part of the D-Day invasion on June 6, 1944.

In 1945, Montgomery returned to Hollywood, making his uncredited directing debut with They Were Expendable, where he directed some of the PT boat scenes when director John Ford was unable to work for health reasons. Montgomery's first credited film as director and his final film for MGM was the film noir Lady in the Lake (1947), in which he also starred, which received mixed reviews. Adapted from Raymond Chandler's detective novel and sanitized for the censorship of the day, the film is unusual because it was filmed entirely from Marlowe's vantage point. Montgomery only appeared on camera a few times, three times in a mirror reflection.

He also directed and starred in Ride the Pink Horse (1947), also a film noir.

In 1948, Montgomery hosted the Academy Awards. He hosted an Emmy Award-winning television series, Robert Montgomery Presents, which ran from 1950 to 1957. The Gallant Hours (1960), a film Montgomery directed and co-produced with its star, his friend James Cagney, was the last film or television production with which he was connected in any capacity, as actor, director, or producer. In 1954, Montgomery took an unpaid position as consultant and coach to President Eisenhower, advising him on how to look his best in his television appearances before the nation. A pioneering media consultant, Montgomery had an office in the White House beginning in 1954.

Montgomery has two stars on the Hollywood Walk of Fame, one for movies at 6440 Hollywood Boulevard, and another for television at 1631 Vine Street.

And perhaps his brightest star was the creation of the delicious Elizabeth Montgomery who played the wonderful, sassy Samantha on Bewitched. There is no doubt, Samantha was so much more beguiling then I Dream of Jeannie. Not even a contest.

Jeanne Crain - Actress -Appeared in Meet me in St.Louis, Cheaper by the Dozen - studio glossy and Cut Autograph

Shipping cost is calculated to cover the insurance for the item at $5,000.00. I would be happy to figure any way you would like the item shipped, prior to purchase.

Note: The item is as is. Please do not request to purchase the autographs separately. The value of this collection is that it is all together, and each were acquired by the same person as a collection.

Please email me for the rest of the pictures of each page.

Will be happy to answer any and all questions.