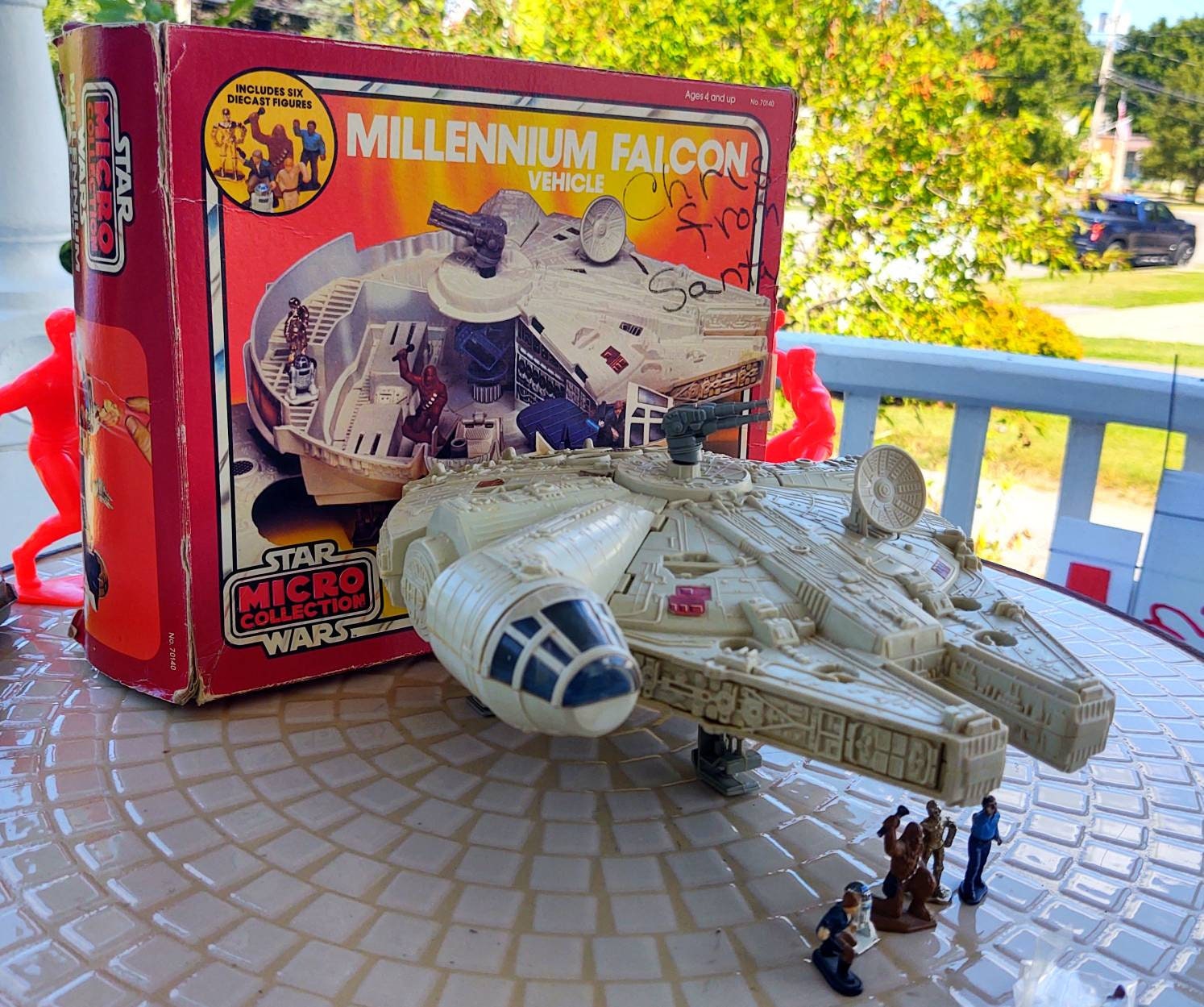 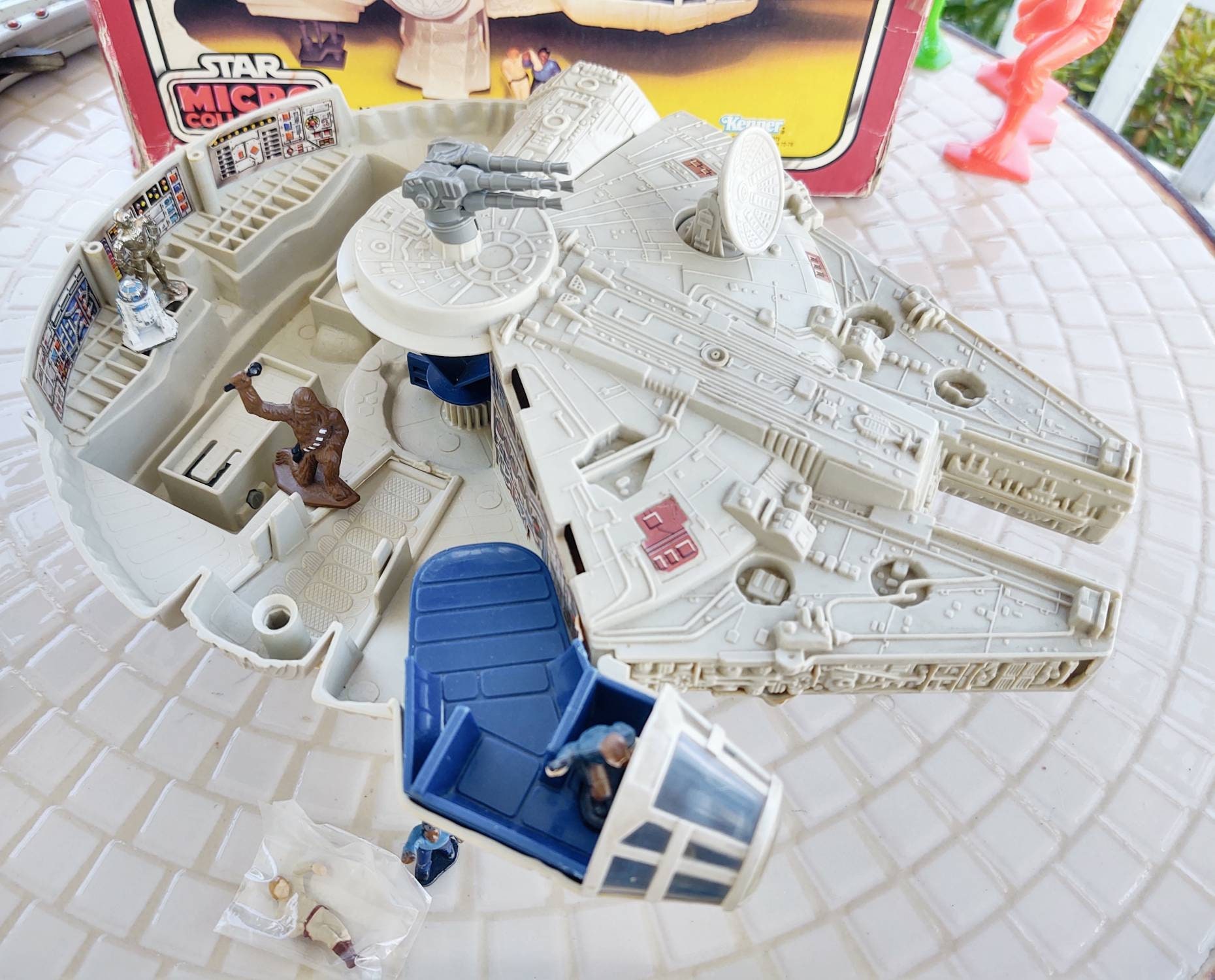 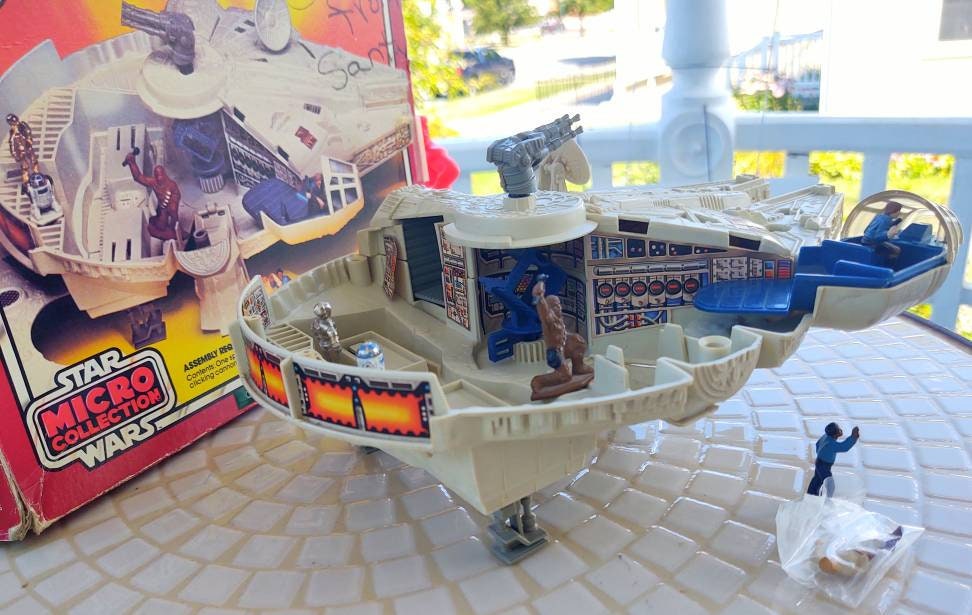 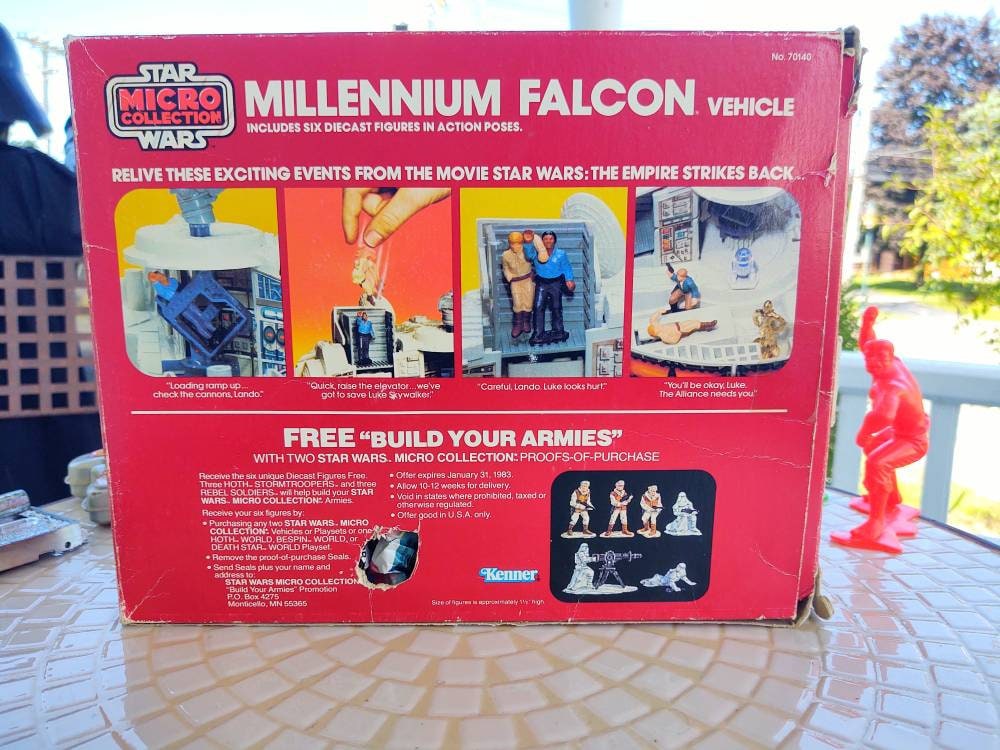 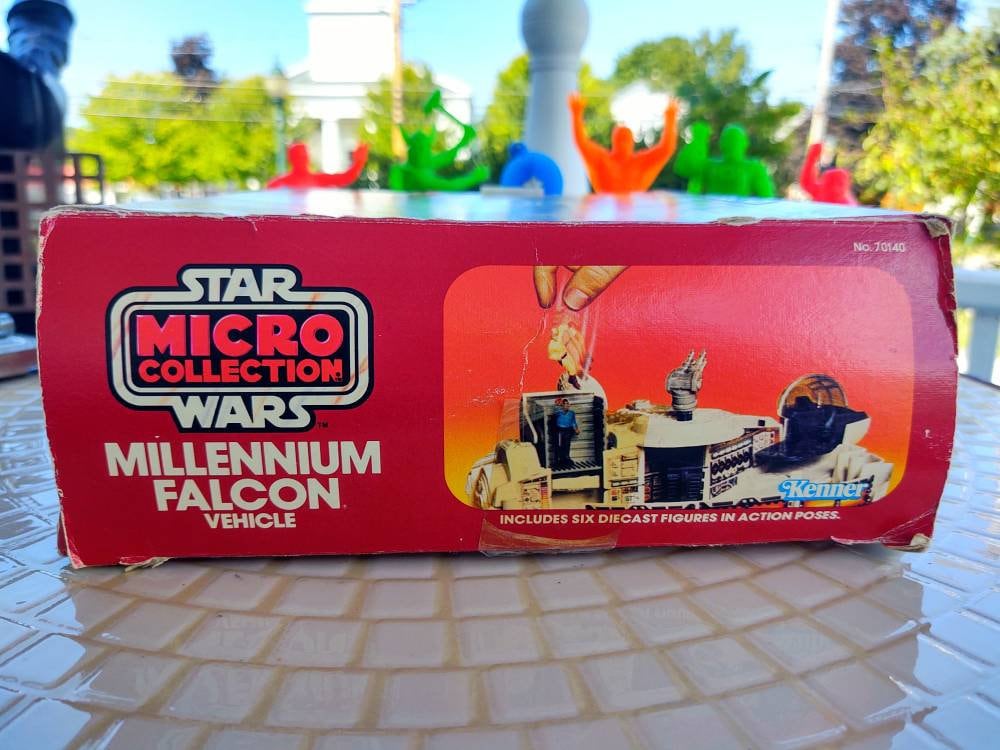 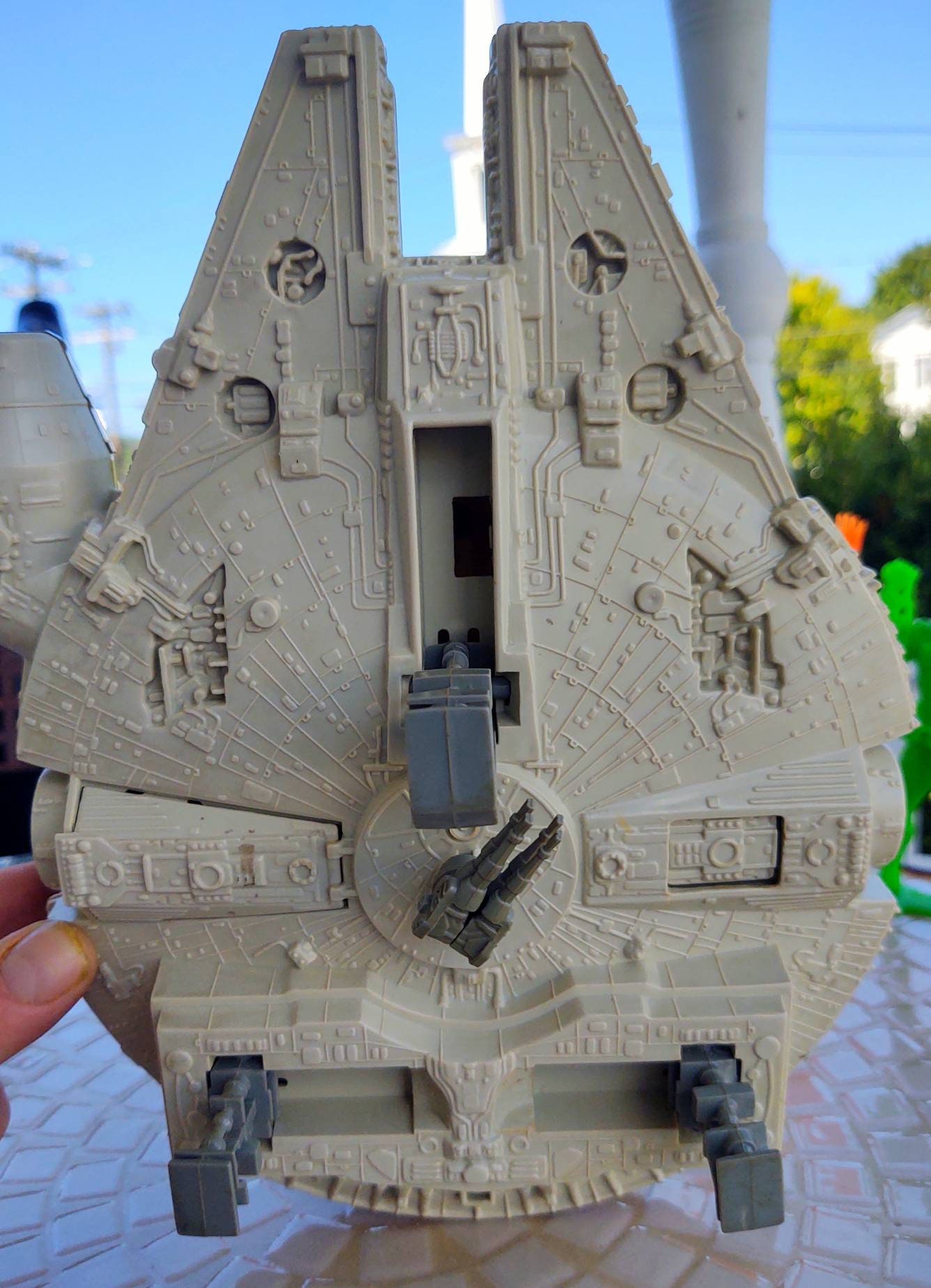 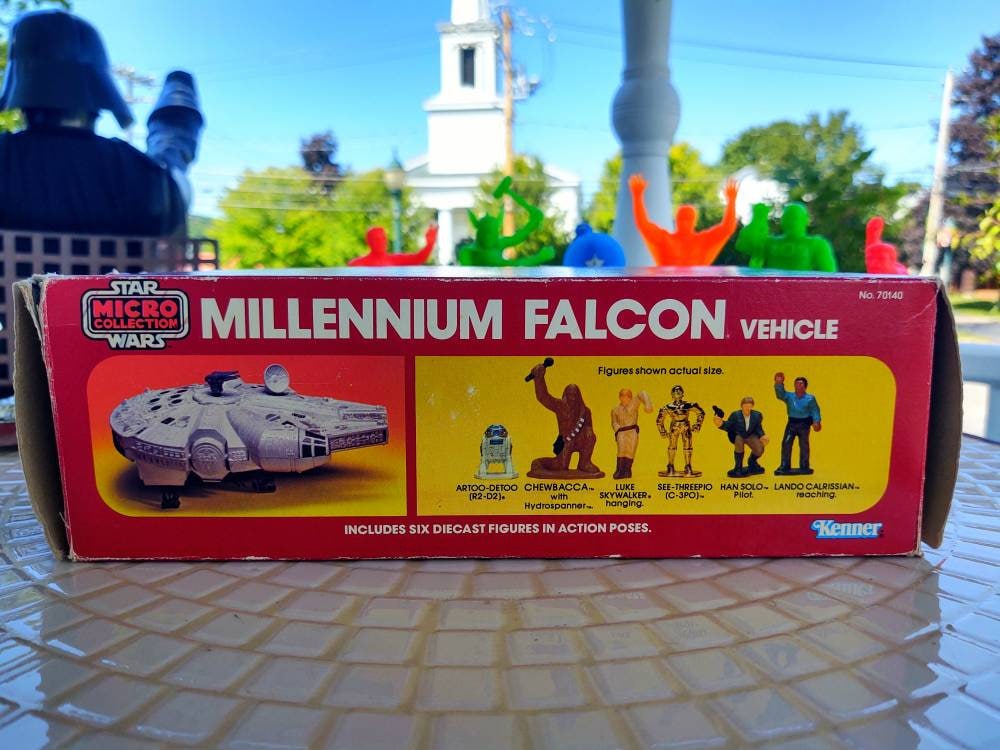 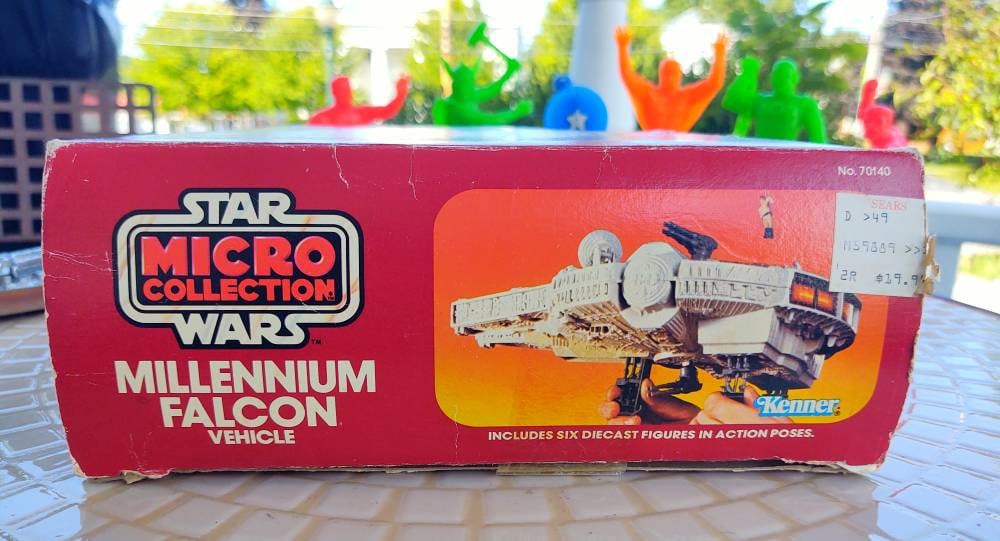 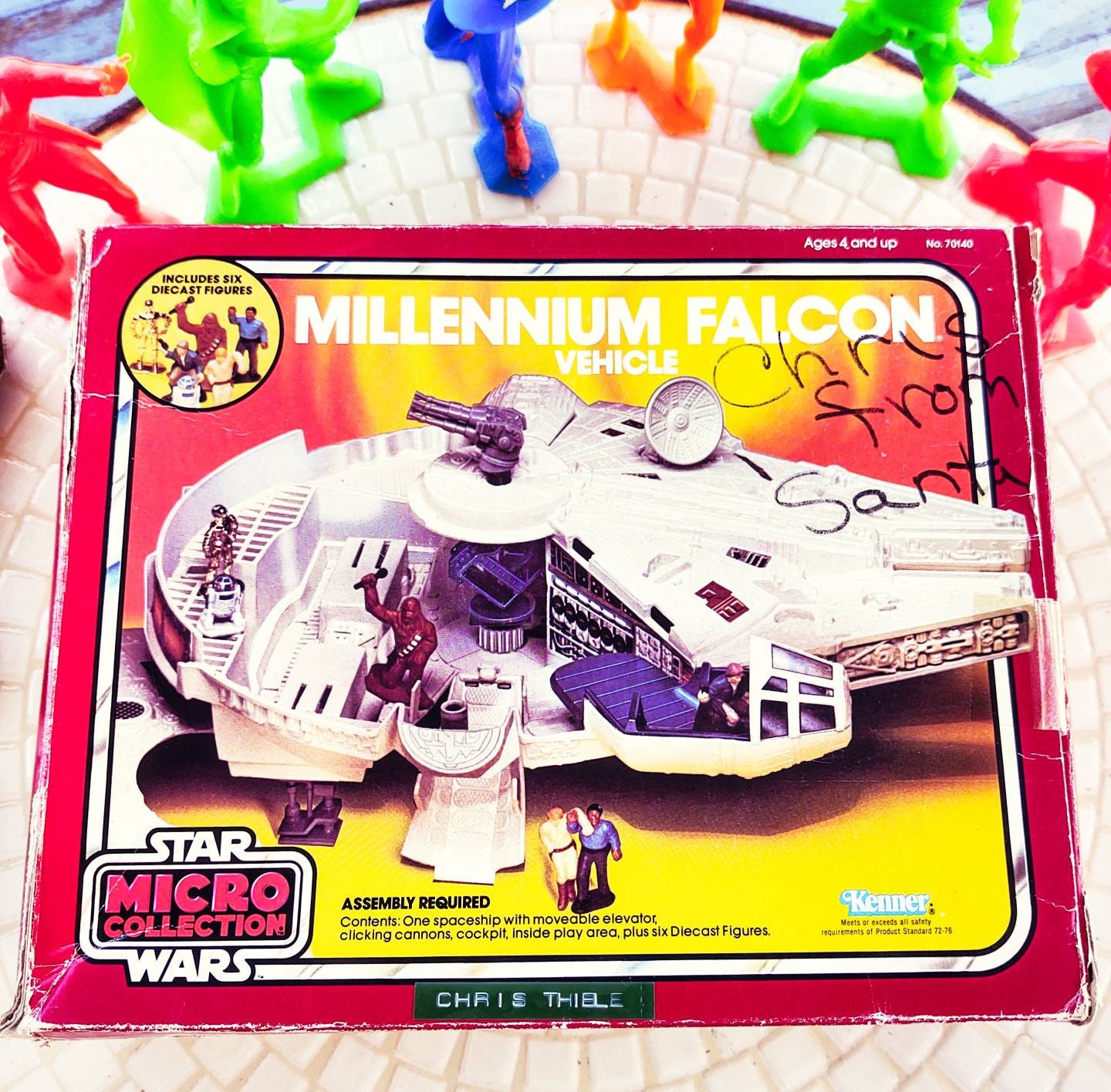 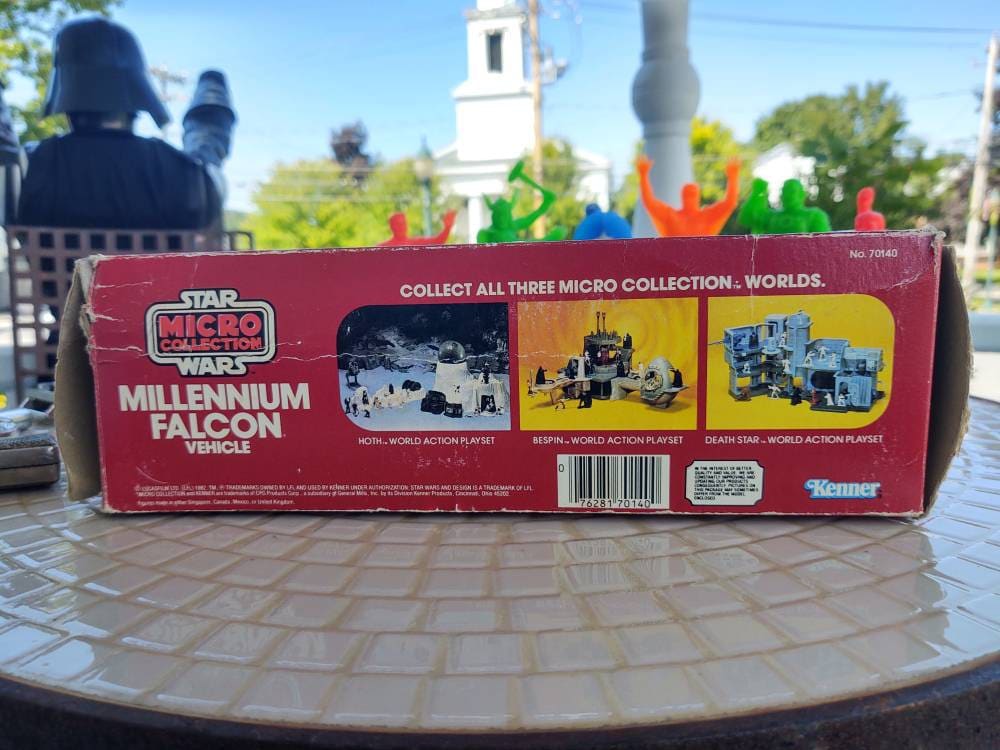 This thing is beyond cool. The Force is strong with this Falcon. The box is in gently used condition -- it's a box a kid took care of since he got it for Christmas in 1982, but it's not super great. You can clearly judge for yourself. Looks good enough that it's displayed in the locked glass cabinet in our physical store (The Rec Room). As you can see it still has the note from Santa and the lucky recipient's name on the box, and the proof of purchase was cut. The figures are in by and large very good condition to excellent. The Luke is still sealed in his baggie. Chewie, Han, and Lando are excellent, while the two droids have some wear. These Micro Collection Falcons are fairly rare to find with I think all stickers, all guns, radar dish, ramp, cockpit glass, all features work, color is outstanding. One rear landing gear was broken and repaired. Unfortunately, it has a slight twist, so it won't fully retract. We've included a good matching replacement that you can swap out if you want, but you can't display this with the gear up (unless you have a stand), so it doesn't matter for display purposes.

For some further backstory on this one-season only release, the good folks at Star Wars Collector Archives (the SWCA.com) have this to say:

"The Micro Collection Millennium Falcon was awesome; definitely my favorite toy in the line. Unlike Kenner's Millennium Falcon action figure toy, which was so out of scale that the figures couldn't even stand up inside of it, the Micro version of the vehicle was acceptably sized in relation to the tiny metal figures that came with it. Other notable features included a pop-up access hatch to the outside of the hull, a gunner's chair, and rotating cannons on the ship's top and bottom. (It was the only vintage Falcon toy to feature this movie-accurate detail.)

"The six figures the toy came with indicate it was meant primarily to re-create scenes from The Empire Strikes Back. Chewie takes a pose from Echo Base on Hoth, when the Wookie is seen repairing the Falcon; Han, crouching with his blaster ready, is meant to represent the character as he's fending off laser blasts while trying to escape from Hoth; the poses of Lando and Luke derive from the end of the film, when a one-handed Luke is rescued from the bottom of Cloud City; and Threepio and Artoo...well, they're just Threepio and Artoo. It's really a shame that a Leia figure wasn't included in the set, as she spent a good portion of the film aboard the vehicle.

"Meant for a limited release via Sears during the 1982 Christmas season, followed by a wide release in '83, the Falcon fell victim to the pre-mature cancellation of the Micro line and was never issued in large numbers. In the end, collectors could only get it by going through Sears, and Sears didn't carry it for too long."

Here's the vintage advertising form the 1982 Sears Wishbook (and oh man does that take me back -- you can probably find half our shop in it, no joke):

"Here's where all the action began for HAN SOLO and CHEWBACCA. Now the Rebel Alliance depends on them! The top of the MILLENNIUM FALCON comes off and reveals extra play areas and storage compartments. In fact, this vehicle includes nearly all your favorite features scaled to size. With die cast figures included, it adds another great dimension to STAR WARS fun. Ages 4 and up. Assembly required"

And here's the Star Wars Collector's Archive discussion on the background for the one-year only limited run of Micro Collection sets after the release of Empire, and hence, why they are so rare ... and the rarest of the production runs was this Falcon:

May the Force be with you.