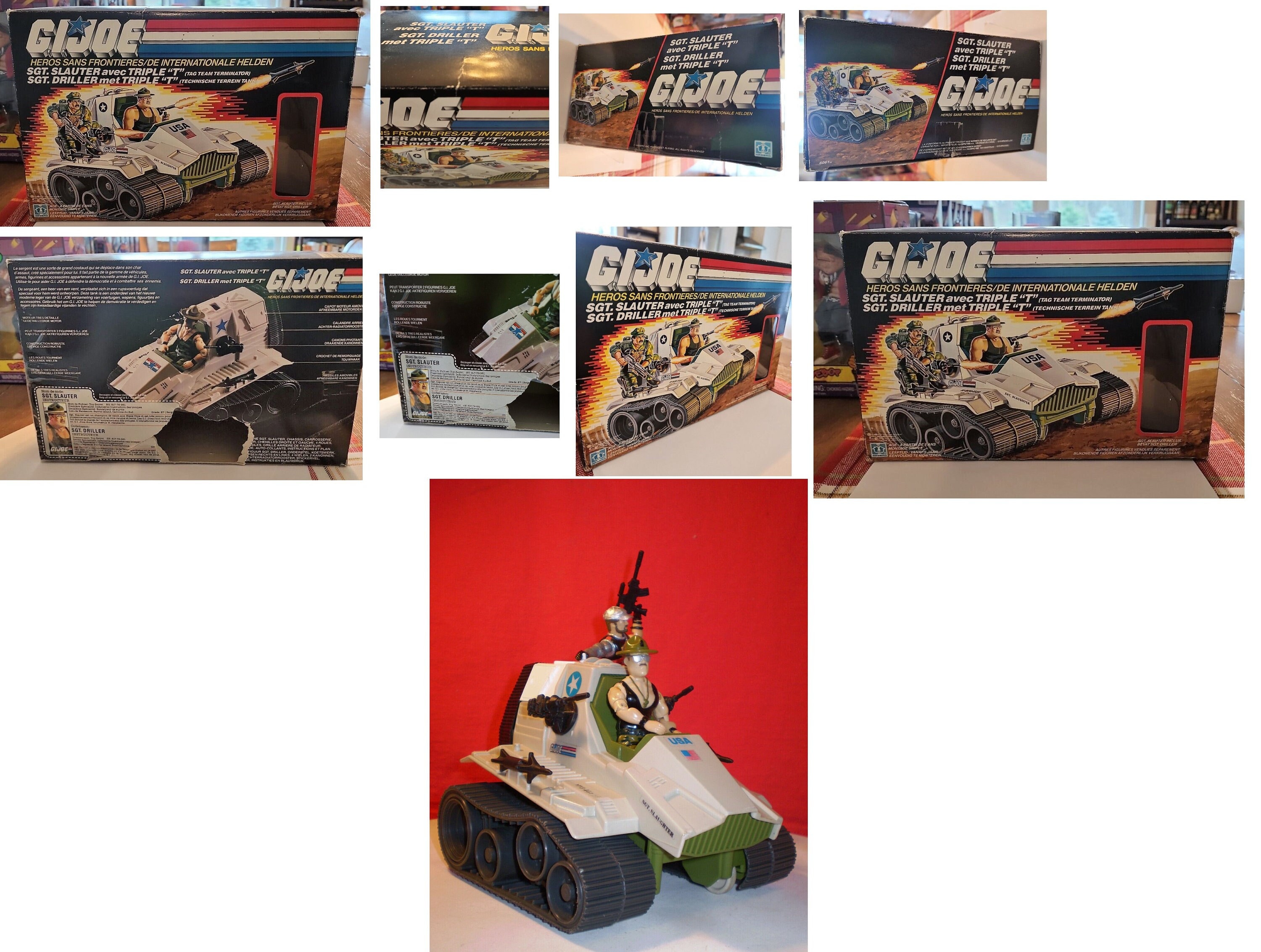 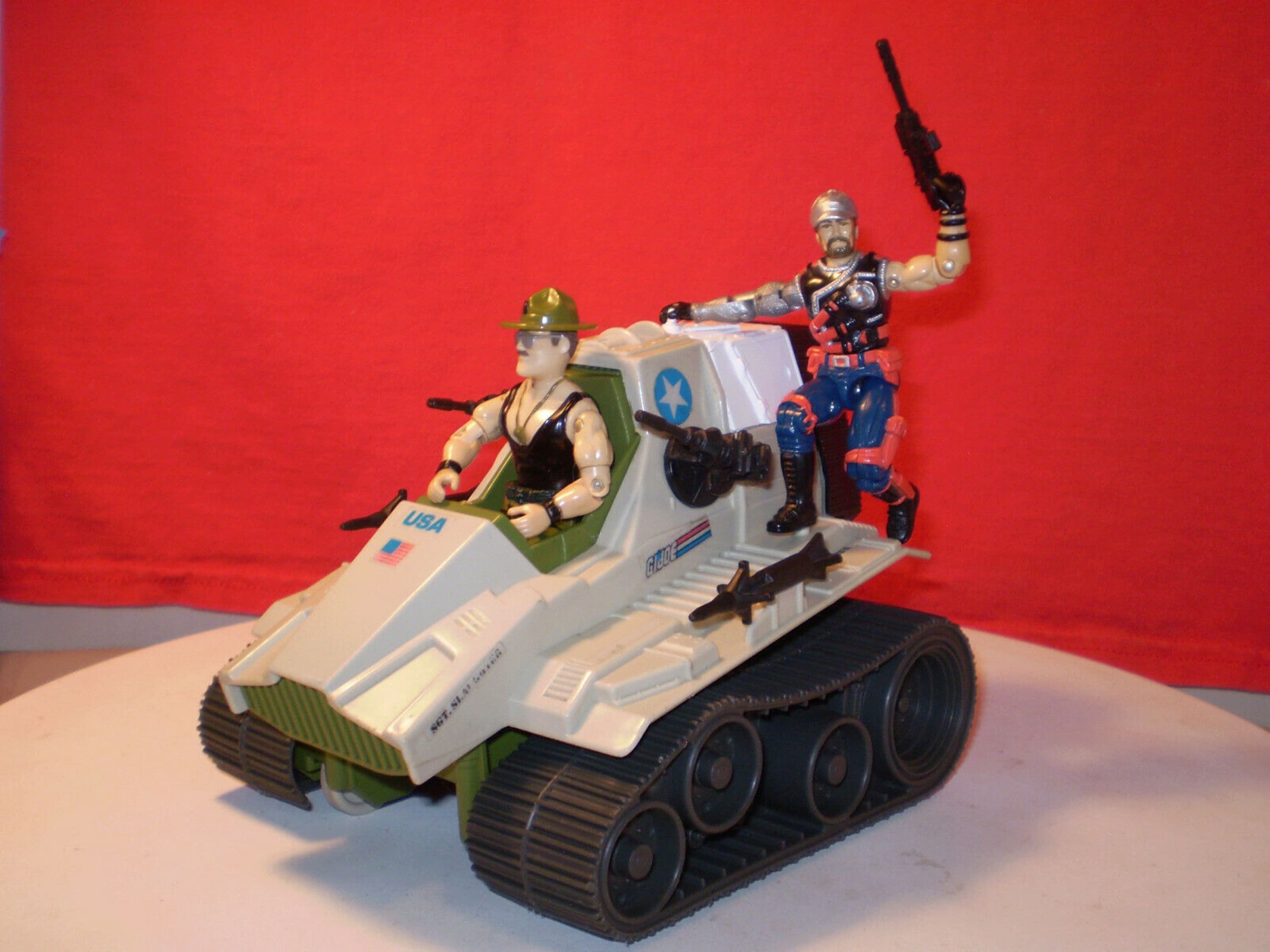 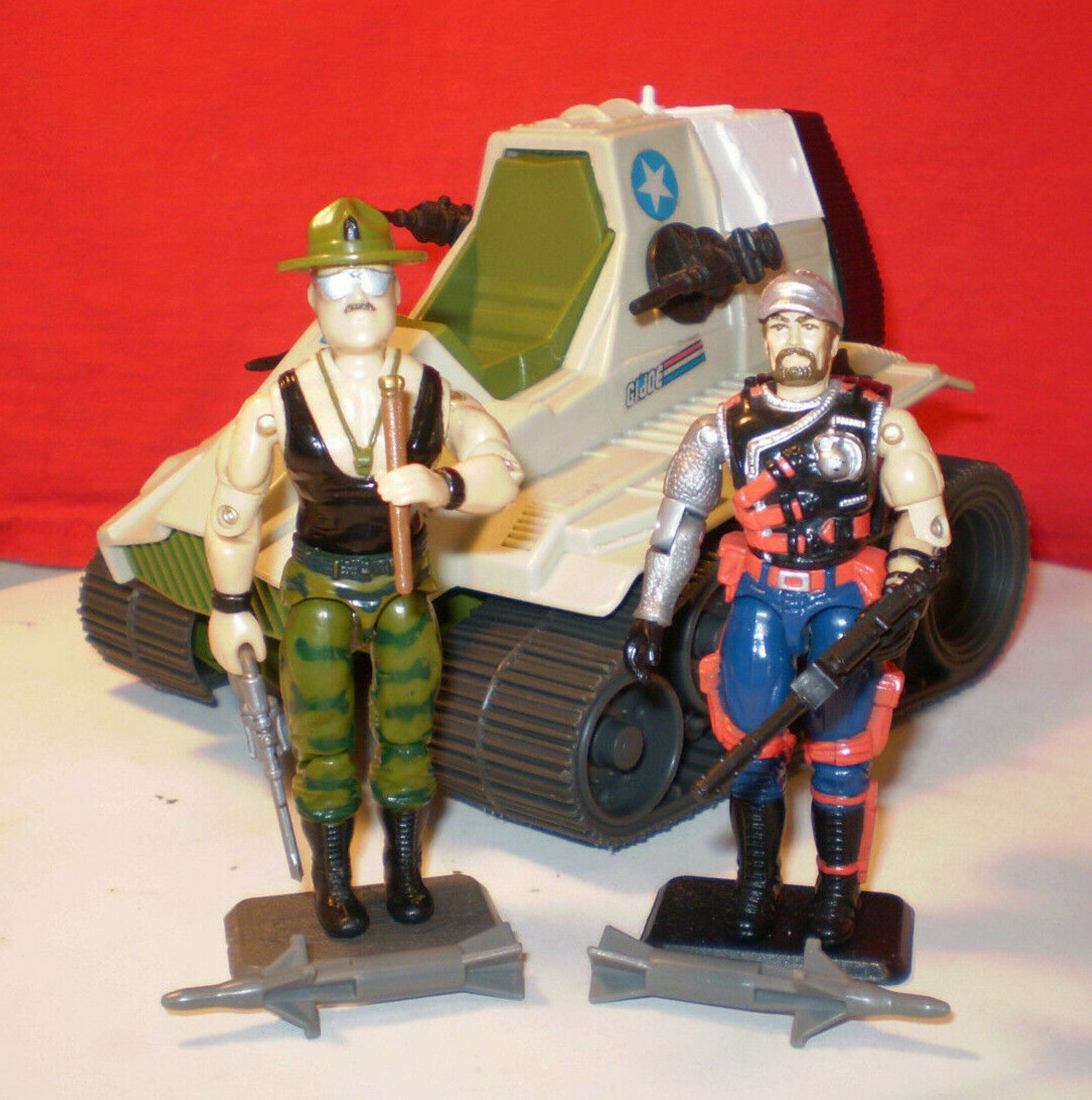 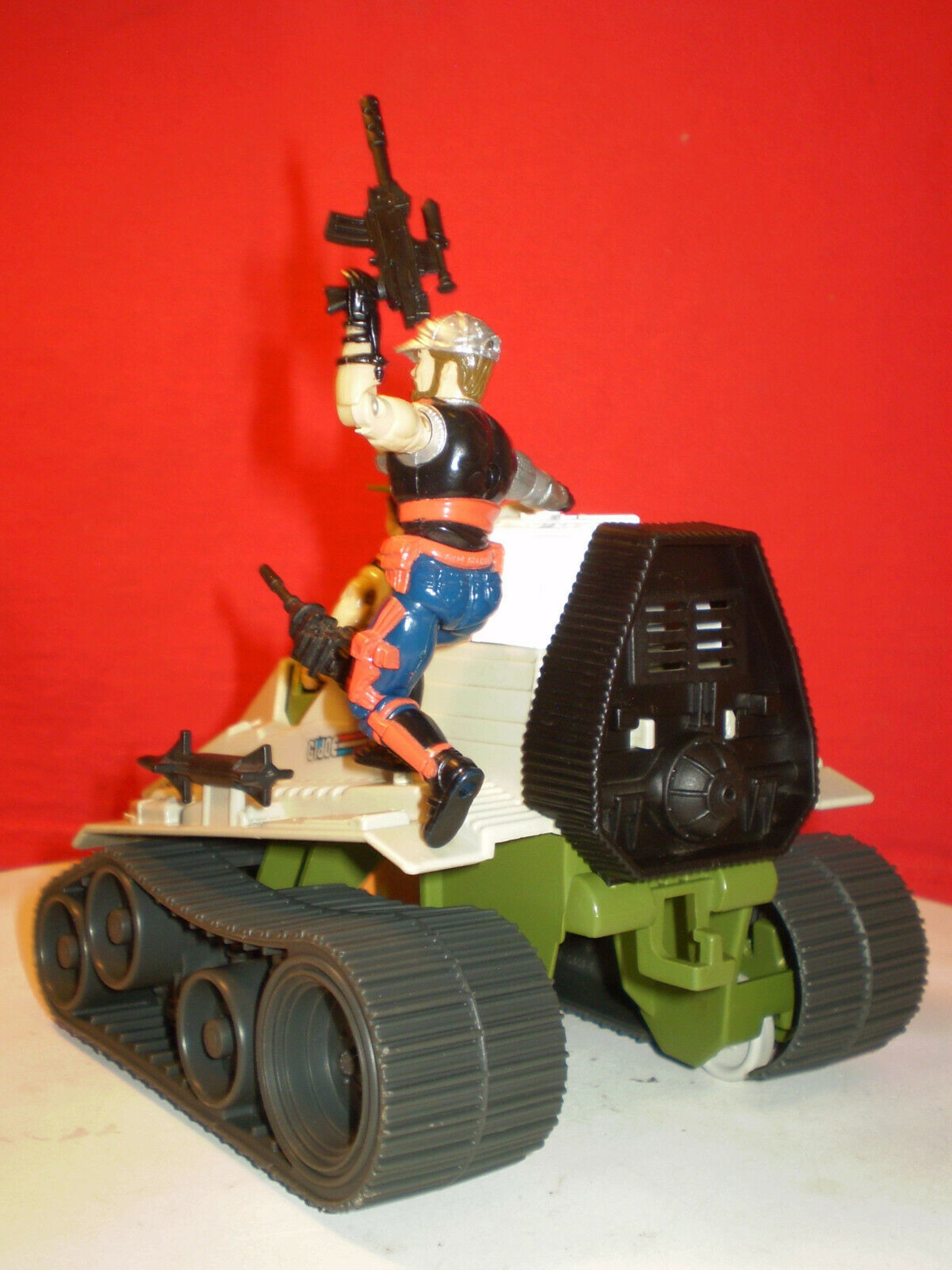 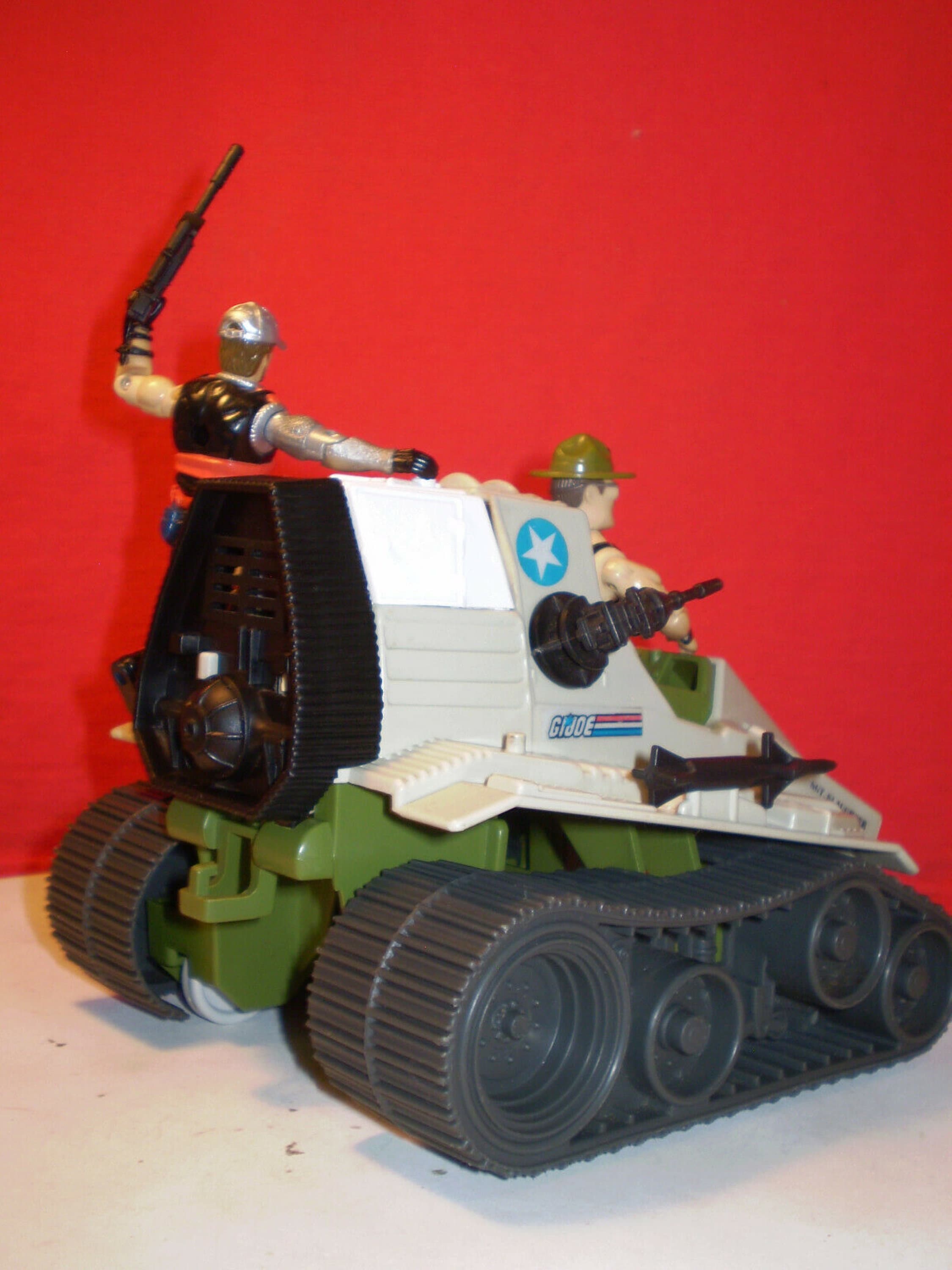 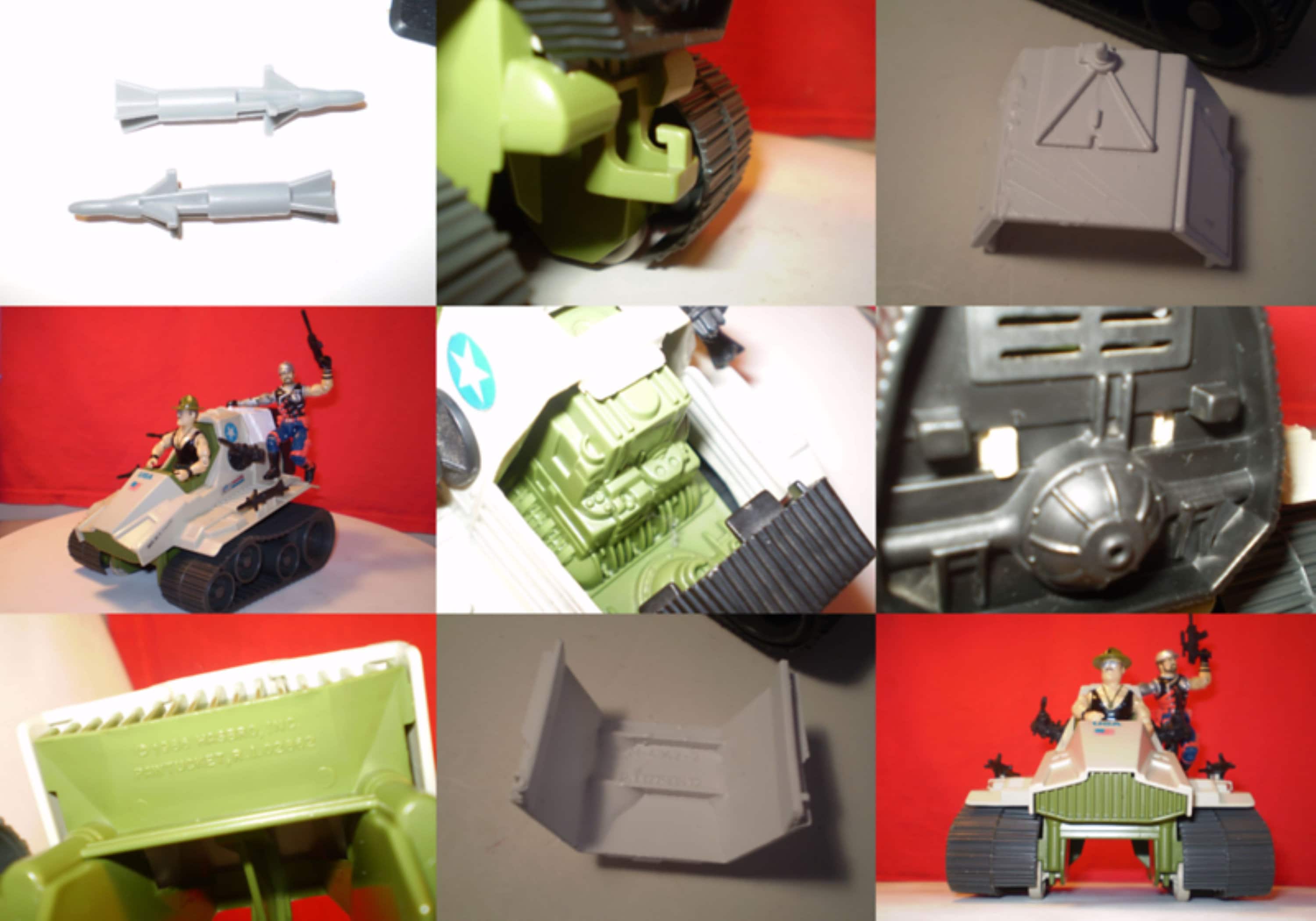 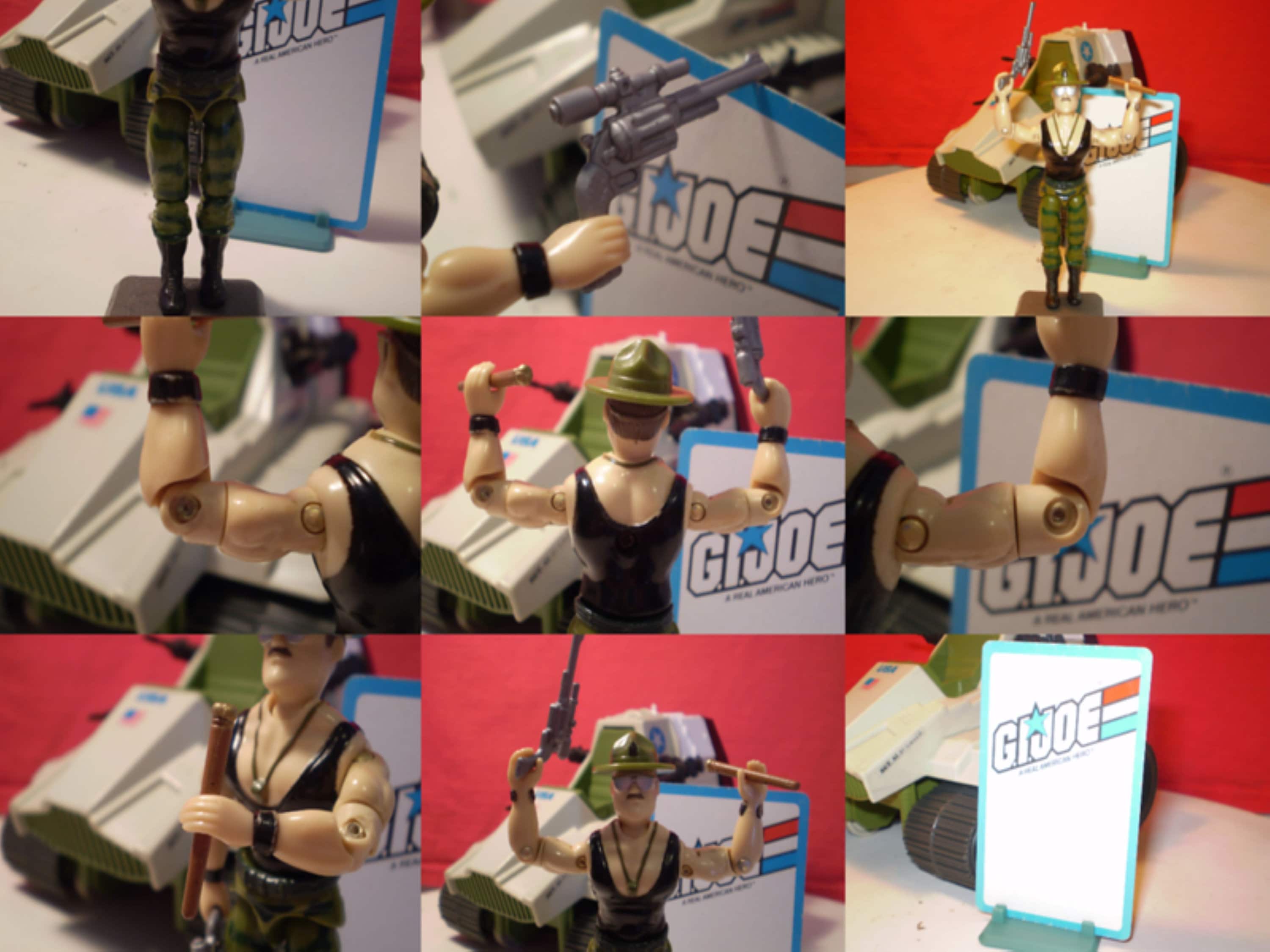 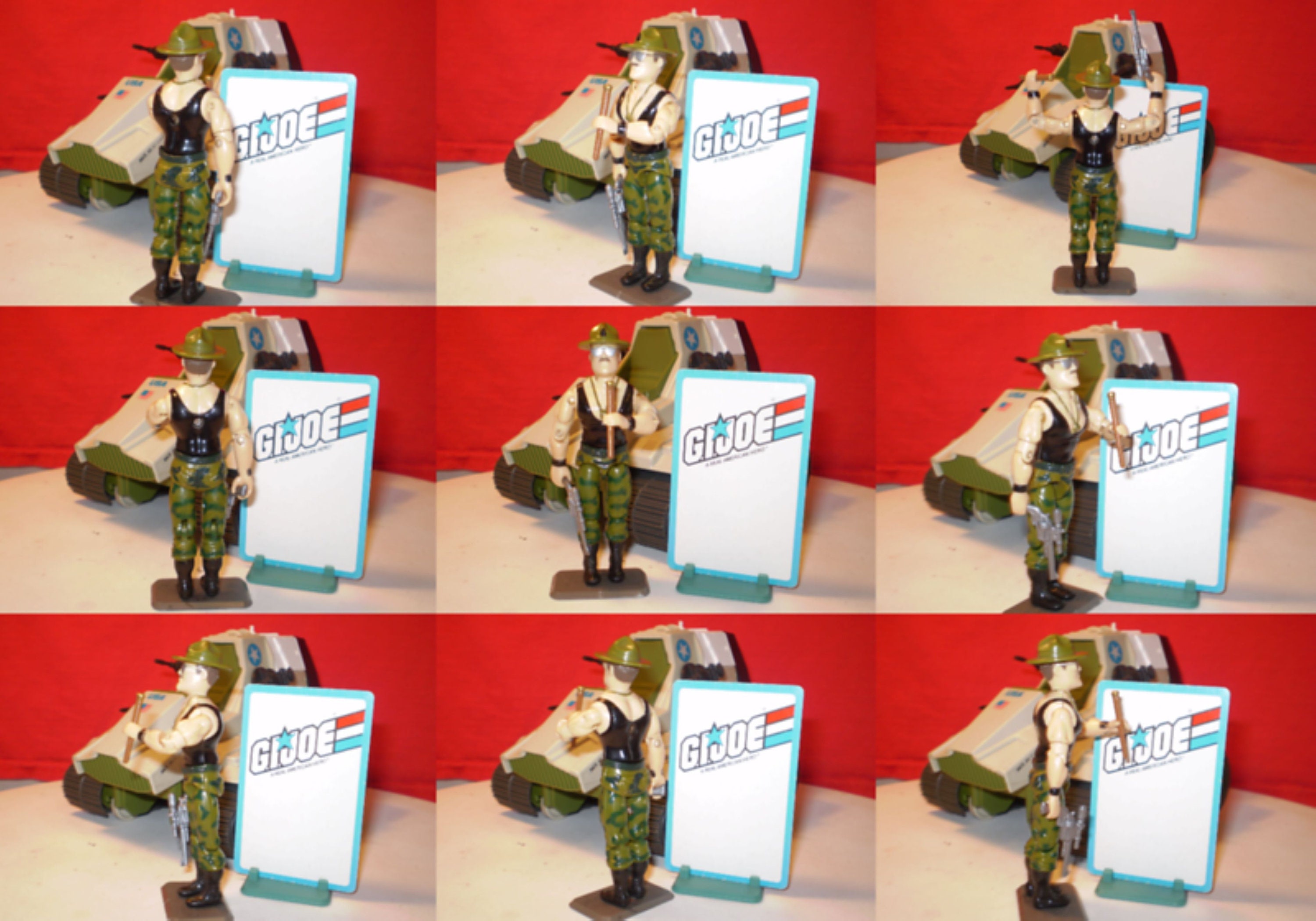 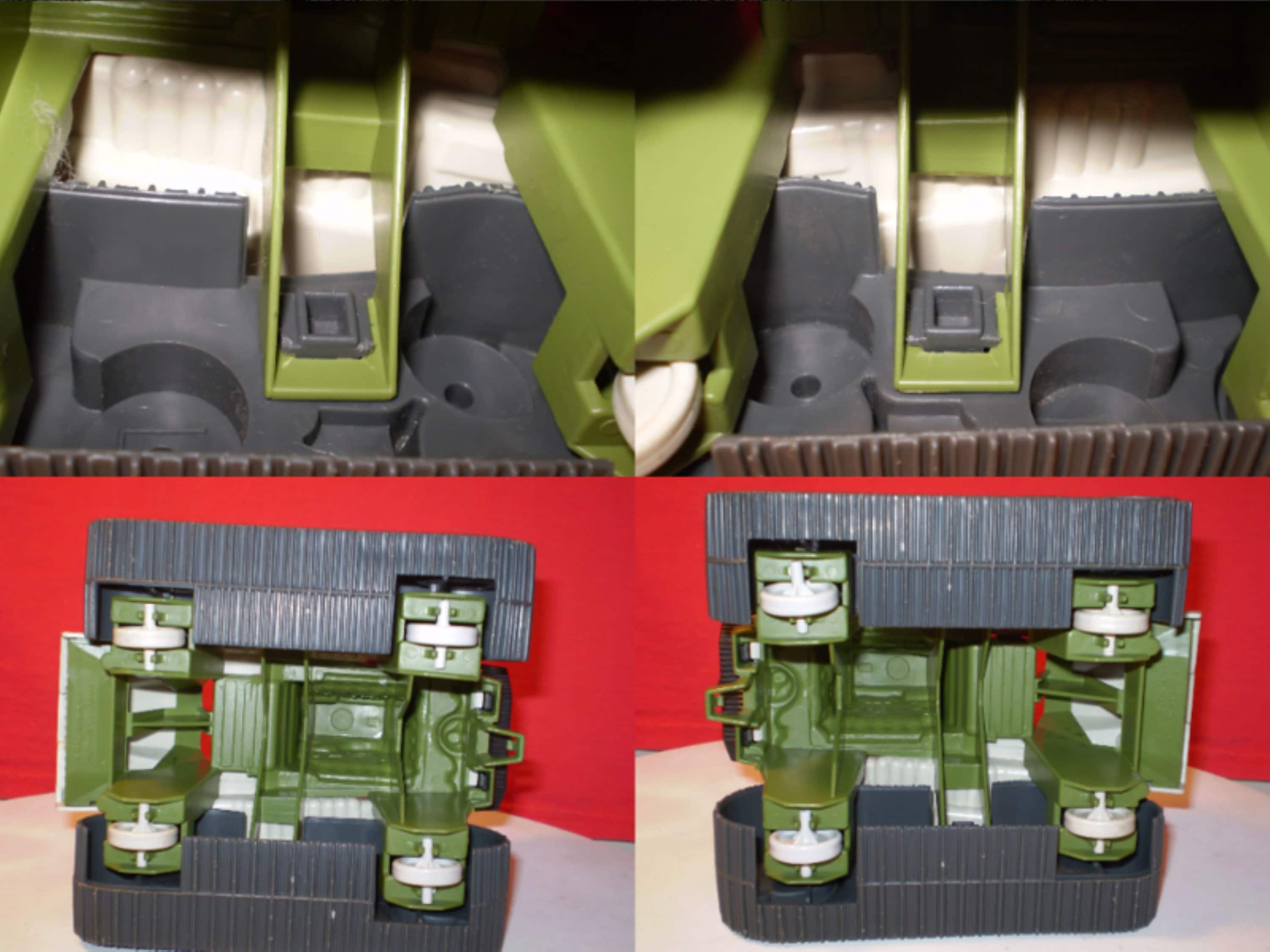 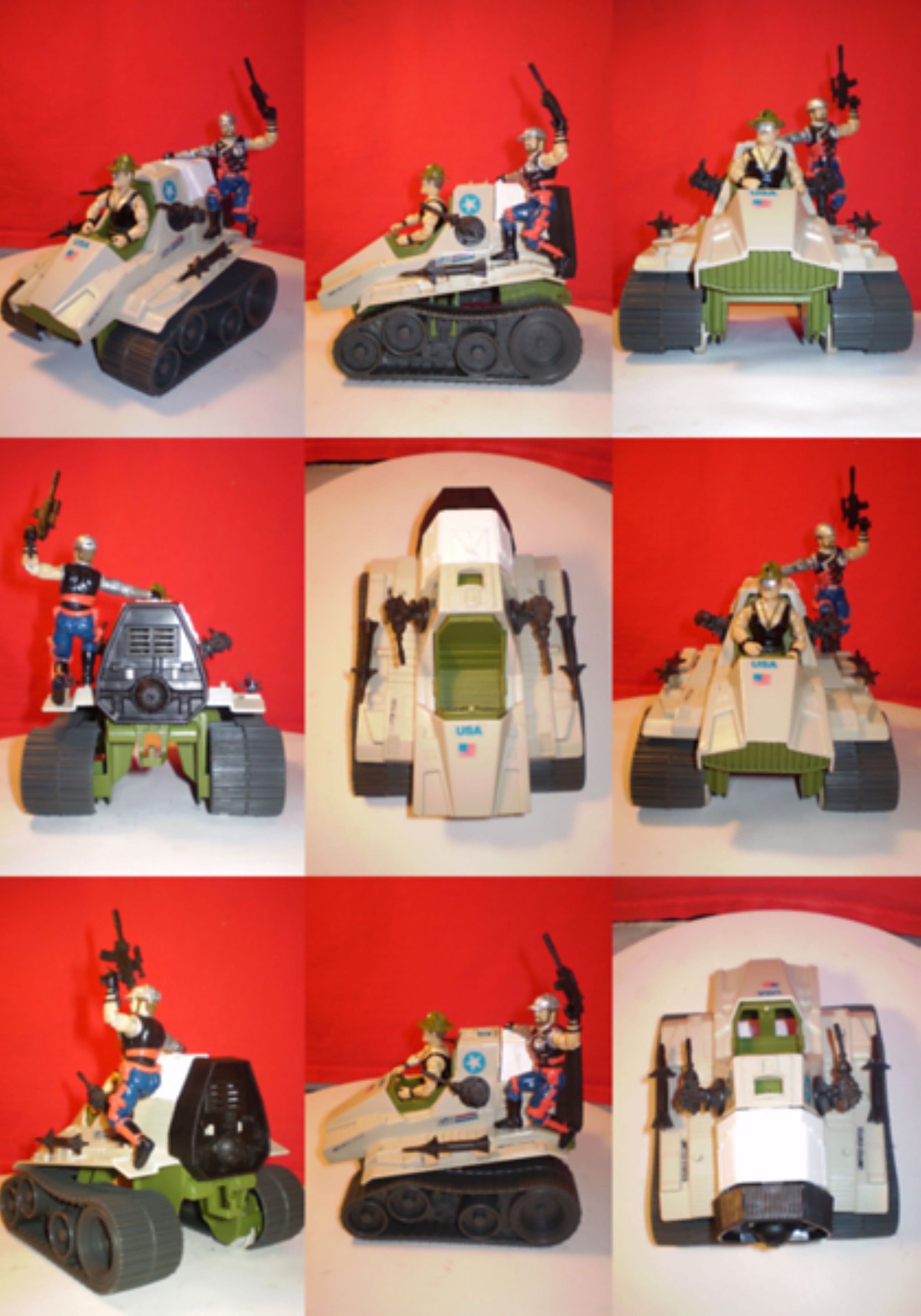 1987 Hasbro GI Joe Triple T With 1986 Sgt. Slaughter and 1991 Mercer, ARAH -- Note, the figure cards you can see in the composite photos are not included with the sale. This DOES include the box, which is the Canadian version and, aside from a hole in the bottom back of the box, displays very nicely. Front and all sides look fantastic, as does the cello. As noted, only problem with the box is a piece is missing out of the bottom back side, but nobody displays their boxes with the backside showing so not really much of an issue for this otherwise awesome set.

Very clean, the green and white is still vibrant and the sticker placement is good.

The driver stick is broken off and missing. 1/2 clips for the rear black grill/exhaust are intact. 2/2 the latches that hold the treads are intact and not cracked (very rare in this condition) as you can see from the underside pics.

Vehicle description from the world of ARAH: The Triple T (or Tag Team Terminator) is a small, treaded vehicle that was seemingly built exclusively for Sgt. Slaughter's use on the G.I. Joe team. Though it lacks a main cannon, it nonetheless has two side-mounted guns and two missiles it can launch at an enemy.

As tough and durable as the Triple T is, Sgt. Slaughter likes to drive it through most enemies, a feat he can get away with it thanks to these vehicular capabilities:

MGM-79 HEAT Missiles: the Triple T's secondary armaments are two High Explosive Armor Piercing, anti-tank missiles, one mounted on each side of the vehicle (on the passenger platforms).

Raked Nylon Micro-mesh Armor: protecting the driver of the Triple T, this durable armor is not quite as potent as that on the rest of the Triple T, but nonetheless provides its driver Typical Protection against physical attacks aimed at them specifically.

Titanium Nylon Micro-mesh Armor: this super-duty bonded armor helps the Triple T to remain quite durable - a necessity with the Sarge in the driver's seat.

He has tight joints, right elbow swivel is suspect in some positions, some playwear, New O-ring and no screw rust.

Accessories: I have included a CUSTOM REPRODUCTION of his brown baton with gold tip, I have also included a sweet silver hand-cannon revolver handgun, and the figure stand pictured is included.

Slaughter's background from the world of ARAH: All the Joes are super-tough and they've been through the roughest, most grueling training to become the most skillful specialists in theworld. It takes a master of drill-training to weld stiff-neckedtenderfoot Americans into the most stout and honorable positions in the Mobile Strike Force. That master and heavy-duty headman is none other than Sgt. Slaughter—the extremest in rough and tumble fun.

"Sgt. Slaughter thinks it's his personal mission to kick the butt of every boot in Pendleton. This guy can drill his trainees into the ground for 72 hours straight before he breaks a sweat. His favorite pastime is marching over the boys' backs while they do finger pushups in the mud, and spewing out brutal verbalities. He has been known to ride his tank through enemy fortresses rather than blow them up just because it's more fun. They say he eats nails and spits out dum-dum bullets. They say he cleans his teeth with barbed wire, brushes his hair with a rat-tail file and shaves with a blowtorch. Everything and everywhere is a battle field to Sgt. Slaughter."

He has good joints, very little paint and playwear, New O-ring and no screw rust.

Mercer's background from the world of ARAH: Mercer was the only Cobra Viper to defect to G.I. Joe. He originally signed up with SGT. SLAUGHTER'S MARAUDERS, an outfit so secret that the Pentagon never acknowledged their existence. Recently transferred into the main body of the G.I. Joe team, Mercer is invaluable as a tough fighter and as a source of inside information on Cobra tactics and battle doctrine.

"Although the rest of the G.I. Joes weren't too thrilled about having a defector in the ranks, especially one from Cobra, we soon developed a grudging respect for his no nonsense attitude and coolness under fire. We also didn't mind the fact that Mercer is strong enough to carry a 88mm Stanford Rocket Launcher with an ample supply of anti-tank armaments. None of this means that we like him very much, but then again, he doesn't like us very much either."